This Hypersonic Weapon Will Change the Future of Warfare 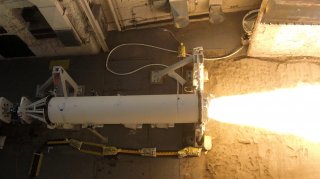 The Army and Navy have fired off a first-stage Solid Rocket Motor (SRM). This is a step towards preparing its fast-emerging new generation of hypersonic weapons for war.

The SRM is part of the Army’s Long Range Hypersonic Weapon (LRHW) program and the Navy’s Conventional Prompt Strike weapon, two high-speed, long-range and precision-guided projectiles capable of traveling at more than five times the speed of sound on route to destroy a target. The SRM was a live-fire test, the second in a series of assessments intended to prepare to introduce unprecedented tactical advantages when it comes to high-speed, long-range precision strikes.

The SRM, described as a first stage portion of a new missile booster, will be paired with the Common-Hypersonic Glide Body, which is a warhead that will bring new high-speed lethality to the Army and Navy hypersonic weapon. The test allowed the military services to assess the motor and prepare new missile components for operational use.

Maneuverability during flight is one of the key attributes of the weapon. Now, Army weapons developers are working on a “tech insertion” that would enable it to destroy both multiple targets and react to moving targets. This technology would permit attacks on maneuvering enemy targets such as armored convoys and other kinds of moving vehicles. To conduct such a feat seamlessly may require adjustments to the weapon’s guidance system. While details are often unavailable for security reasons, such a configuration could involve a two-way datalink through which a maneuvering warhead en route to its target could receive new information in milliseconds and alter course as needed. Destroying moving targets at hypersonic speeds could stun but not destroy an adversary with pre-existing defenses such as interceptors or sensors put up to stop missile attacks. By contrast, a moving convoy has fewer missile defenses and would likely rely on overhead drones or reconnaissance assets incapable of tracking a hypersonic weapon.

Speed and maneuverability are some of the attributes the Army seeks with its LRHW, which is slated to arrive by 2023. The Army is very committed to ensuring that the program meets its delivery timeline given the existence of Russian and Chinese hypersonic weapons.