IEDs Can Still Stop the U.S. Military in a War 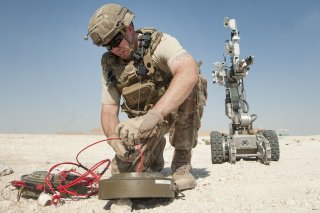 They are IEDs, a persistent and lethal threat to U.S. forces which, perhaps surprisingly to some, continue to pose a serious risk as the U.S. pivots to great-power competition.

During years of war in Iraq and Afghanistan, IEDs and roadside bombs were a consistent, serious threat responsible for massive amounts of U.S. casualties. However, a key dynamic that may now be slightly overlooked is that IEDs will continue to present significant threats in an era of great power competition. Of course, the Pentagon needs to sustain its readiness to fight counterinsurgency campaigns to the extent they come up, despite the decline in combat in Iraq and Afghanistan. At the same time, it would seem clear that any kind of advancing ground force, including a heavily armored mechanized force or dismounted infantry, would need to be prepared to face mines, roadside bombs and vehicle-borne IEDs. Unmanned or robotic platforms armed with explosives likely present a fast-expanding threat.

All of these factors contribute to a current Army effort to build more Double-V Hull Stryker vehicles, reconfigured platforms engineered with blast-debris dispersing V-shapes underneath the vehicle. The initiative, which includes both new-build vehicles and efforts to reconfigure existing flat-bottomed Strykers, first emerged more than five years ago as an Urgent Operational Need from Iraq and Afghanistan. The Army worked with General Dynamic Land Systems to fast-track the vehicles, with the specific hope of better safeguarding Stryker crews from IED attacks. Now, the Army is advancing a deal with GDLS to continue production of Stryker Double-V hulls through a large $2 billion contract.