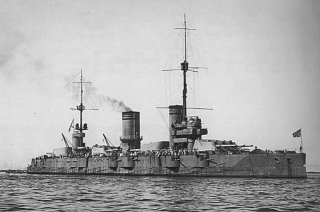 The origins of the Russian Navy actually date back to the fourth century, when the first Slavic flotillas were used to navigate the rivers of Russia, while it has existed as an official force in some form since 1696. The first true iteration of the Russian Navy was established by Peter the Great (Peter I) who was quoted as saying, “A ruler that has but an army has one hand, but he who has a navy has both.”

Yet, despite Peter the Great’s ambitions, as well as those of Catherine the Great who established the Black Sea Fleet, Russia was never a true “naval power” and that fact was made abundantly clear centuries later during the Russo-Japanese War in 1905.

At the time the Russian Navy had been considered the third most powerful in the world, but the war proved to be a catastrophe for the Russian military in general and the Russian Navy in particular. Russia faced a crushing threat from the Japanese in the Battle of Port Arthur, and afterward, warships of the Russian Navy’s Baltic Fleet took part in an arduous journey to turn the tide in the war. However, instead, that resulted in its utter and complete destruction.

In response to the loss of the Baltic Fleet, a new class of Russian dreadnoughts was ordered personally by Czar Nicholas II—despite a very agitated Duma, which initially refused to fund the construction of a new naval force. However, in 1909 the new class of Gangut-dreadnoughts was authorized. The contract was initially won by Blohm & Voss, Hamburg—but the Duma refused funds unless the ships were to be Russian built.

That decision to utilize Russian workers resulted in several problems. The first was that the Russian industry could not produce high-tensile steel in quantity, and that led to a prolonged construction of the warships. Moreover, instead of a fully original Russian design, the final layout of the ship actually owed much to the Italian Dante Alighieri.

Other sacrifices were required.

The protection and endurance of the warships were reduced in favor of firepower and speed. The armament layout, which was influenced by another Italian warship, the Vittorio Cuniberti, was twelve-by-twelve-inch (305 millimeters) 52-caliber guns in triple turrets on the centerline. The longest then at sea and noted for their accuracy. The guns were constructed at the Obukhov arsenal, and on the base level provide a low center of gravity on the long hull of the warships. That made for a good stable firing platform as well as a low silhouette.

In total, four of the warships were built including the Gangut, Poltava, Petropaviovsk and Sevastopol. They were delivered from December 1914 through January 1915, but were not completed until later that year. The four battleships were used to defend the mouth of the Gulf of Finland—yet as a German attack never came, the ships were largely untested in World War I. That was probably for the best.

Even that created problems, as the restless crews of the vessels were among those who participated in the general mutiny of the Baltic Fleet after the February Revolution in 1917, and they later joined the Bolsheviks after the October Revolution. The warships formed the backbone of the Red Army’s naval forces. As a result, they were targeted in August 1919 during the Allied intervention. The Petropavlovsk was torpedoed and sunk at Kronstadt by a British coastal motorboat. However, she was salvaged and repaired, and with her sister ships remained in service with the Bolsheviks after the Russian Civil War.

Following the Red’s victory in 1922, all four of the ships were given proper “revolutionary names.” The Petropavlovsk became Marat; Sevastopol was renamed to Parizhskaya Kommuna (Paris Commune); Gangut was renamed Oktyabrskaya Revolyutsiya (October Revolution); and Poltava became Frunze.

Following a fire, Frunze was essentially reduced to a utility hull, and she remained docked in port when Nazi Germany invaded the Soviet Union in June 1941.

The other three had been rebuilt from top to bottom in the 1930s and were still in service and remained the spearhead of the Soviet Navy. However, Marat was crippled by German dive-bombers at the naval base at Kronstadt on Kotlin Island in September 1941 and later served as a battery. Oktyabrskaya Revolyutsiy was in Tallinn at the outbreak of the war but was able to fall back to Kronstadt where it was also heavily damaged after three bombs hit its bow. It was repaired enough that it was able to provide fire support during the Siege of Leningrad and later took part in the Vyborg-Petrozavodsk Offensive in June 1944. It was also the last Soviet battleship to fire its guns in anger during the offensive and for its service was awarded the Order of the Red Banner.

Parizhskaya Kommuna was in the Black Sea when the war broke out. It remained in Sevastopol until forced to evacuate by advancing German troops. The ship was withdrawn from combat in April 1942 as it was too large a target, but it later led the surviving units of the Black Sea Fleet back to Sevastopol in the fall of November 1943. The Parizhskaya Kommuna was also awarded the Order of the Red Banner.

All four ships were stricken from the naval registry in the early 1950s and sold for scrap—ending the careers of the warships personally ordered by a Czar.