India to Adopt the Swedish AT4 Anti-Tank Support Weapon 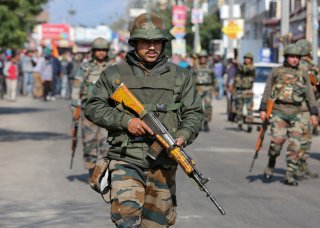 Since its introduction in 1987, the Swedish 8mm AT4 unguided anti-tank weapon has been employed by militaries around the world. Saab Bofors Dynamics’ man-portable, single-shot, disposable, recoilless smoothbore launcher remains one of the most commonly used light anti-tank weapons. Even though the platform is generally considered ineffective against modern main battle tanks, it could soon be employed by the Indian Army to address threats from lighter Chinese tanks and combat vehicles in the mountainous areas of the Ladakh Valley in the Kashmir region.

"The Indian armed forces are a new customer for [the] AT4," Saab said in a statement to the Hindu. "This order includes the AT4CS AST, which can be fired from confined spaces such as from inside buildings, bunkers, and other urban environments."

According to Janes Weapons: Infantry, the CS stands for confined space, which means that the weapon can be fired from confined spaces as small as 22.5 meters. The AT4CS reportedly uses liquid to cool the gases ejected from the rear, and the weapon can still be carried and operated by a single infantryman.

The AT4 was designed to fire a variety of different projectiles, including high-explosive anti-tank rounds; anti-structure and breaching tandem-warheads; anti-armor extended range rounds; and reduced sensitivity, anti-tank warheads for urban or jungle combat.

It has also been reported that the AT4 will replace the older Carl Gustav anti-tank platform—a weapon that has required two operators. The Carl Gustav has been in service with the Indian military for decades. Clearly, New Delhi is looking to increase the lethality of its infantry as its standoff with Beijing continues.

"Modernization of defense equipment is the key to stay competitive in the modern war environment, and if India decides to replace its existing Carl Gustav with AT4 in coming years, this will be a large program from the Indian Ministry of Defense. Besides, if Saab agrees to manufacture AT4 in India, this contract for AT4 support weapon is expected to provide benefits to the domestic defense market," explained Gone Sai Kiran, a defense analyst at the international data analytics firm GlobalData.

The Ordnance Factory Board of India has been a partner for the Carl Gustav weapon and associated ammunition production in India since 1976. It is also expected to benefit from this contract if the weapons are produced domestically.

"The AT4 systems are combat-proven across the world. They are lightweight, single-shot, fully disposable and truly characterised by its ease of use and handling. This selection of the system through a competitive process underscores Saab’s commitment to bringing to Indian forces the latest systems," said Ola Rignell, chairman and managing director at Saab India.

Global Data's Sai Kiran added that "India's focus on enhancing its air defense and anti-tank capabilities will continue, as seen with the current deal of AT4 and the recent test of India's BrahMos missile with greater domestic content. India will also aim to export this and other services and technologies to its allies while increasing domestic knowledge and capabilities."

For now, the focus may be on supplying the Indian military before turning to exports.

"There is still some way before India matures these technologies to make them attractive to foreign buyers," suggested Sai Kiran. "In the meantime, GlobalData expects India to be an attractive market for international companies willing to invest into the country and grow their capabilities using all the resources available in a growing market like India."