Why Tensions Between China and India Won't Boil Over 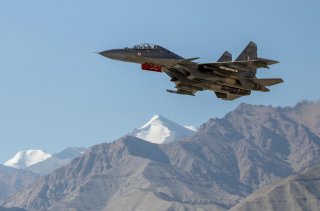 China-India relations seem to be at their lowest point in decades. To head off the risk of escalation, it could be in the interest of both nations to look for ways to improve a relationship that is at once one of the world’s most important and most dangerous.

In June 2020, Chinese and Indian soldiers confronted each other in the disputed area on their western border known as the Galwan River Valley. Although not publicly admitted by either side (presumably, for fear of domestic political repercussions within India), China is believed to have taken control of at least twenty square miles of Indian controlled territory following the incident. Implicitly, this is recognized by India which has made repeated requests to China to pull back its troops to the Line of Actual Control (LOAC) that preceded the incident. There has been no progress since, despite nine rounds of military-to-military level talks at the disputed site. India subsequently imposed economic sanctions on China, leading to lost contracts worth several billion dollars, again to no avail.

The immediate provocation for the incident was India’s construction of a feeder road to the LOAC in 2019. China had complained to India in May that it raised the likelihood of quick forward deployment of troops against China. India ignored the complaint suggesting that it had the right to build infrastructure in territory under its control, even if disputed. A month later, China sent troops to the disputed area and India responded by sending its troops to the area. There were casualties on both sides, marking a change from the decades of mutual understanding between the two countries that they would not use firearms or kill the personnel of the other side.

A similarly tense situation had been created in the region of Doklam in 2017, in an area of dispute between Bhutan and China and close to the border with India. Similar to the Ladakh incident, but with roles reversed, India had then intervened on behalf of Bhutan by sending troops to confront Chinese road-building crews working in the area. In response, China sent troops to the disputed site. Fortunately, the situation was resolved within a period of three months, with agreements at the level of ground military commanders on pulling back to earlier locations of deployment. However, China resumed its road-building program in Doklam. Prime Minister Narendra Modi and President Xi Jinping subsequently held meetings in 2018, wherein they agreed to a consultative process for resolving issues.

It seems that China and India took different lessons from Doklam that they have applied in Ladakh. The lesson for India was that its intervention in Doklam had no long-term effect on Chinese road construction and that it should therefore consolidate its hold on the disputed lands under its control quickly through road construction, troop placements and other means. The lesson for China was that the difference in military capacity between the two countries allows it to take actions, such as taking Indian-controlled territory in Ladakh, that India cannot take.

A compromise may be difficult to find. In China’s strategic calculation, India’s position is certainly that of a rising power. Given that China is engaged in a deep struggle for strategic parity with America, it was hoping for stable relations with India, based on the Modi-Xi understandings of 2018. From China’s perspective, India damaged the relationship through declaration of the disputed territory of Ladakh as a union territory of India in August 2019 and its road-building activities in 2020. As a result, the country must make a significant move to repair the relationship. However, China believes that, for domestic reasons, India will not backtrack on Ladakh.

India’s viewpoint is different. China’s rapid growth in recent decades and its superior military capacities make for an inherently unequal relationship. China has been willing to accommodate India on an equal basis in some cases, such as joint exploration for oil in Sudan, and the establishment of the New Development Bank. But there are other instances that show China’s unwillingness to accommodate India, such as on permanent membership of the Security Council and the membership of the Nuclear Suppliers Group.

The Belt and Road Initiative, a major Chinese strategic initiative to develop the infrastructure of partner countries, has driven a deep wedge between China and India. The BRI has placed its biggest bets in South Asia, particularly in Pakistan and Sri Lanka, but also in Nepal, Bangladesh and the Maldives. Afghanistan is also likely to receive significant BRI investment.

India is alarmed at such activities in its traditional zone of influence, some of which, such as roads in Pakistan-controlled territory that it claims and ports in Sri Lanka, may be used to support China’s defense needs.

It seems clear that, unlike Doklam, the Ladakh confrontation between China and India is based on strategic differences. The situation, therefore, remains fraught with the risk of escalation. Yet, as the main rising powers of the twenty-first-century, both sides also have much to gain from accommodation and collaboration. Leadership on both sides could help by focusing on the long-term gains in a spirit of give-and-take.

Rafiq Dossani is director of the RAND Center for Asia Pacific Policy, a senior economist at the nonprofit, nonpartisan RAND Corporation, and a professor at the Pardee RAND Graduate School.