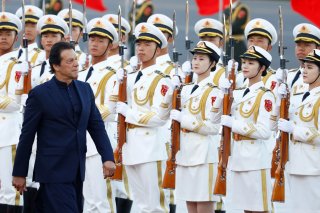 In focusing on the China challenge, the U.S. foreign policy establishment needs to pay more attention to how Pakistan has become virtually the sole strategic partner of China in Asia. Pakistan is not only serving China’s interests in South Asia but also enabling it to sidestep the U.S. Indo Pacific strategy. Did Washington’s South Asia policy, specifically U.S. relations with Pakistan, create a vacuum happily filled in by China?

The fact is that the U.S.-Pakistan relationship has not been an easy one to handle for both sides. Over the last six decades it has served some important interests of the two countries but not without cost to some of their other interests. The relationship has lacked an organizing principle, strategic consensus, and a long-term view.

As U.S.-China geopolitical competition intensifies it would be appropriate to ask what role Islamabad’s deepening ties with Beijing may end up playing in it, and how an improved U.S. relationship with Pakistan could minimize any negative impact on American interests.

Let us start with all this talk of a new Cold War and the so-called “Thucydides Trap” which has Pakistan worried that Washington might push it to choose between China and the United States. But historical analogies are nearly always half true, and we often end up looking at the wrong half.

The reality is the U.S.-China relationship is highly complex and multi-dimensional. President Joe Biden will likely define China not as a threat but as a formidable rival with whom the United States has to find a way of competing without confrontation. Secretary of State Antony Blinken summed it up when he said that the relationship is simultaneously adversarial, competitive, and cooperative.

Choosing between the United States and China

A new Cold War or not, asking Pakistan to choose between China and the United States would be risky for Washington. It will tighten Pakistan’s embrace with China which neither Pakistan nor the United States would like. They both need each other, for their own reasons. It is not just the United States; China too is pivoting to Asia and the Middle East, and Pakistan is where the two pivots face off. And Washington cannot leave Islamabad entirely dependent on China and useful only to Beijing’s strategic purposes, more so in the light of the reported $400 billion ten year trade and investment deal between China and Iran.

If both Pakistan and Iran come under maximum pressure from Washington, they could conceivably seek an alliance with China. But this is not what Pakistan or the United States would really like to see happen. Indeed, as a medium-sized country with serious security-related challenges and threats, Pakistan seeks good relations with all big powers. It has successfully juggled its relations with the United States and China in the past. But that was a long time ago. Much has changed since.

The question is how will the current policy dilemmas of the United States and Pakistan be resolved in the light of the history of their arguably flawed relations? It has been a need-based relationship. It is not Pakistan but its services that have been important to Washington, and the value of the relationship has depended on the quality of the service. That always created tensions, especially as the two countries in successive engagements agreed on one issue and disagreed on another. Washington would reward Pakistan for help on what the two countries agreed on and punish it over what they disagreed on once Pakistan’s cooperation was no longer required. That ended up eroding public trust in the relationship with each side feeling it had given more to the relationship than it got.

The post-9/11 era has severely tested the paradoxes of this relationship as it confronted multiple stakeholders and issues on both sides: the failing Afghanistan war and its spillover in Pakistan, terrorism, concerns about nuclear proliferation and the safety of nuclear assets, the rise of extremism and jihadism in the region, Pakistan’s growing ties with China and Washington’s extraordinary new relations with India. Not to mention the drone attacks. The relationship became conflicted and cooperative and just spiraled out of control.

That uniquely bleak phase in relations is unlikely to repeat itself. America’s Afghanistan war that was at the center of the U.S.-Pakistan tensions is receding into history. The politics of many of the issues related to the war has faded away. And there is a new administration in the United States. Both the United States and Pakistan now have a shared interest in peace and stabilization of Afghanistan.

The Biden administration is reviewing the peace deal with the Taliban. But withdrawing troops from Afghanistan or leaving a small force there does not resolve the crisis. It only solves the political problem of ending America’s war. With the gap between the Taliban and Kabul’s positions too wide to be bridged by negotiations alone, the conflict will likely continue with another name. And Washington will have to address it with means other than its own war. That is where the United States will need Pakistan’s help, especially given Biden’s opposition to forever wars and his likely preoccupation with domestic issues that might limit his foreign policy priorities.

Biden has supported the retention of a small counter-terrorism force in Afghanistan no doubt in the belief that the unresolved Afghanistan conflict would keep transnational terrorist networks like the Islamic State and Al Qaeda alive which will have implications for U.S. security. Potentially these troops could also give the United States a capability to keep an eye on Pakistan’s nuclear facilities, about the safety of which Biden has been concerned in the past.

By keeping the insurgency and terrorism active, continued Afghan conflict will also fuel extremism and militancy in Pakistan, holding the nuclear-capable country’s stability hostage. Jihadists will also threaten India, one of the major areas of common interest to both the US and India, undermining Washington’s China policy.

But Pakistan’s relevance to the United States goes beyond these negatives. Its geographical location makes it important to the U.S.-China geopolitical competition, not just in South Asia but also in the Middle East where Pakistan historically has had close relations and influence with its fellow Islamic countries.

To address its broader interests and concerns in the region, the United States would thus need a serious engagement with Pakistan and a framework of cooperation where convergence and divergence of policies could be reconciled and the two countries’ core interests safeguarded to support a sustainable long-term relationship.

A relationship ridden with contradictions

But the relationship will continue to falter if its historical contradictions, both within the relationship and in how the U.S.-Pakistan relationship interacts with other countries, are not resolved. At stake is U.S. security, and its economic and strategic interests in South Asia, and Pakistan’s economic future and political stability, and peace and stability of the region.

The fact is if Pakistan wants friendly relations with the United States it will have to be responsive to U.S. interests. Opposition to America’s core interests will have no lasting place in U.S.-Pakistan relations. Pakistan should realize Washington’s need for Islamabad’s help goes well beyond Afghanistan. And it matters to Washington that Pakistan is not just a facilitator but also an obstacle to U.S. objectives, in Afghanistan and beyond.

As for Washington, it should know that sanctioning and isolating Pakistan or placing it at the mercy of India’s hegemony will not be a good policy response. It will only serve to make Pakistan more dependent on China, ever more committed to serving its strategic objectives, and lost to U.S. purposes.

Overall, Washington may want Pakistan to be a weak ally of China but strong enough to serve U.S. purposes. But Washington would need a policy on Pakistan that is not simply a derivative of U.S. policies on China and India. Otherwise, both Pakistan and the United States will remain problematic partners for one another.

Washington’s current China policies, especially its opposition to the China-Pakistan Economic Corridor (CPEC), is making Beijing ambivalent about playing a moderating influence on Pakistan and fueling India-Pakistan competition in Afghanistan. This is complicating Afghanistan’s peace and stabilization. The bottom line is there is a disconnect between Washington’s so-called Indo-Pacific strategy and its larger interests and objectives in Afghanistan and Pakistan, which have relevance of their own regarding U.S. geopolitical competition with China.

Washington needs to have a fresh look at CPEC

Geopolitics aside, Washington needs China in some respects in both Afghanistan and Pakistan. China’s involvement on behalf of its connectivity projects like the Belt and Road Initiative (BRI) may help Afghanistan connect to the broader region through economic and trade interests giving the warring parties an incentive for peace. China could also be a critical source of badly needed financial assistance to Afghanistan.

As for Pakistan, the cycle of sanctions by the United States and bailout by China would not serve American interests. The United States will have to realize that CPEC is not just China’s project; it is Pakistan’s too. CPEC will raise Pakistan’s own stake in its economic prosperity and political stability, of which it is quite capable, strengthening its resolve to fight against militant organizations. And it may bring strategic clarity to Pakistan’s Afghanistan policy for its own sake and for the sake of the success of CPEC.