Is India Gearing Up for War With China? 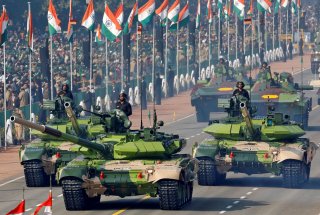 This week the Indian Army began to deploy tanks to forward areas near the border including Chumar, Depsang and Chushul sectors to address any threats from the Chinese People’s Liberation Army (PLA). Indian media outlets report that T-72 and T-90 tanks, along with BMP-2 infantry combat vehicles, have been deployed along the Chumar-Demchok sector, which would be critical in the defense of the Ladakh sector.

The Depsang plains, which are situated at an altitude of more fifteen thousand feet, are flat and thus quite suitable for tanks. It is a critical point where Indian tanks could threaten Aksai Chin at the eastern portion of the larger Kashmir region, and which has remained the subject of dispute between India and China since the 1962 border war between the two Asian nations.

The Indian military has announced it is prepared to remain deployed in the forward posts throughout the winter, and the Soviet/Russian tanks and armored vehicles have been described as being capable to remain operational at even minus 40 degrees Celsius. Special fuels that won’t freeze in sub-zero temperatures are being used with the vehicles.

Eastern Ladakh, which is at an altitude of more than 14,500 feet, is known for having some of the harshest winters in the region, and temperatures regularly plummet to minus 35 degrees in the night during winters, coupled with high-speed freezing winds.

“The Fire and Fury Corps is the only formation of the Indian Army and also in the world to have actually deployed mechanized forces in such harsh terrain,” Fire and Fury Corps Chief of Staff Maj. Gen. Arvind Kapoor told the Indian news media. “The maintenance of tanks, infantry combat vehicles and heavy guns is a challenge in this terrain. To ensure crew and equipment readiness, adequate arrangements are in place for both man and machine.”

Kapoor added that the Indian Army is totally prepared for tackling the harsh weather, and that includes special equipment and clothing, while training for the conditions has also been crucial.

The Indian Army is also being issued with new SIG 716 assault rifles bought from the United States under emergency procurement orders. Troops at the Line of Actual Control in the Ladakh Valley have been issued the weapons, while the rifles are also being deployed to units at the Line of Control with Pakistan and counter-terrorism units in Kashmir.

New Delhi had ordered 72,400 of the SIG 716 G2 Patrol assault/battlefield 7.62x51millimeter rifles in February to replace the antiquated Indian Small Arms System (INSAS) 5.56x45 millimeter rifles; and this past July announced that it would purchase another 72,000 of the U.S.-made rifles under a fast-track procurement (FTP) program.

In addition to the procurement of SIG 716s, India’s military has also reportedly ordered an additional 93,895 CAR 816 (Caracal Sultan) carbines from the United Arab Emirates (UAE) based Caracal International. What is unique about this deal is that the CAR 816 Sultan is chambered in the same 5.56x45 millimeter NATO cartridge as the INSAS rifles, so instead of streamlining its ordnance demands by adopting the SIG 716 India will be using two rifles chambered in different cartridges.

However, a sticking point within the Indian government is that a certain portion of those rifles needed to be manufactured in India to meet the demands of the “Make in India” initiative. Just weeks ago The Economic Times reported that the deal was dead in the water, but now it seems with the threat of conflict in Kashmir, New Delhi will do whatever it can to conclude this potentially big deal and get more guns in the hands of its soldiers.