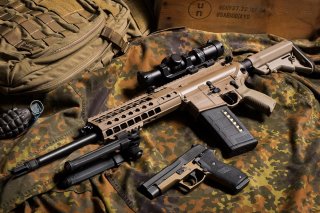 The Indian Army is doubling down on its order of SIG 715 model rifles, chambered in 7.62mm NATO. After announcing a deal last year to purchase 72,400 rifles made by New Hampshire-based Sig Sauer, this week India has announced it would purchase another 72,000.

This comes as the country continues to face off with China, and the original batch is already distributed to units throughout the sub-continent including the Indian Army’s Northern Command.

“We are going to place an order for 72,000 more of these rifles under the financial powers granted to the armed forces,” Defence sources told Asian News International (ANI) over the weekend.

Sig Sauer had announced the original contract in February 2019, and the rifles were delivered under a fast-track procurement (FTP) program. The goal was to replace the existing Indian Small Arms System (Insas) 5.556x45mm rifles that were manufactured locally by the Ordnance Factories board.

“We competed in an open tender with small arms manufacturers from around the world,” said Ron Cohen, president and CEO of Sig Sauer, Inc. via a statement at the time of the initial contract. “The SIG716 rifle underwent a comprehensive and exhaustive testing and evaluation process where it outperformed the competition, and was ultimately chosen, and met all the criteria, as the best rifle to modernize the Indian Army.”

India has the second largest standing army in the world, with more than 1.2 million active troops, and it has been undergoing a comprehensive firearms procurement process that was developed to advance the capabilities of its infantrymen.

The SIG 716, which is produced at Sig Sauer’s New Hampshire facility, is an enhanced AR platform that features a sixteen-inch barrel, M-LOK handguard and six-position telescoping stock.

It is a short-stroke pushrod gas action 7.62mm autoloader that is compatible with SR25 pattern magazines. The SIG 716 uses a four-position gas regulator.

The rifles have been sent to priority units deployed in counterinsurgency and frontier anti-terror roles. However, it won’t be the only new weapon supplied to the Indian military. About 700,000 soldiers will receive the Kalashnikov AK-203, which are being produced as part of a joint venture with Russia’s Kalashnikov Concern and India at the Amethi ordnance factory.

However, there have been delays on the production of the AK-203 due to several procedural issues faced by the two parties, while production has slowed due to the ongoing novel coronavirus pandemic, which has hit India especially hard. These could be among the reasons why New Delhi is now forging ahead with a second order of the SIG 716 rifles.

Moreover, as Guns.com reported, President Donald Trump’s visit to India proved a highlight for the nation when he spoke to an enthusiastic crowd at the world’s largest cricket stadium in Ahmedabad and noted, “India is now a major market for American exports—and the United States is India’s largest export market.”

In addition to the 72,000 SIG 716s, the Indian Defence Ministry has also agreed to purchase 16,000 light machine guns (LMGs) from Israel.

All this comes as India and China remain in a stand-off position in the Ladakh, which only further highlighted India’s need to keep its military equipped with the latest in small arms.