The Kalashnikov: 200 Years of Russian Guns (Not Just AK-47s) 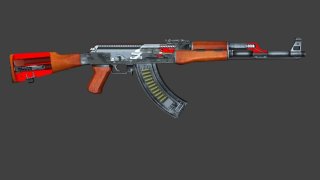 Technically, it isn't even a company, but the Russian defense manufacturing concern, and has been the main supplier of small arms for Imperial Russia, the Soviet Union, and the Russian Federation for well over 200 years. Until 2013, it was also known as the Izhevsk Machine-Building Plant. And in recent years, it has supplied about 95 percent of all small arms in Russia as well as exporting to twenty-seven countries around the world.

Simply put it has become the largest firearms maker in Russia and it is where the Kalashnikov (AK) series of assault weapons were manufactured, as well as the RPK light machine gun, the Dragunov SVD, SKS, Makarov pistol and Saiga-12 shotgun. The concern also manufactured the fifth-generation Kalashnikov rifles—the AK-12 and AK-15—for the Russian Army. In addition, it has also produced Vikhr-1 guided missiles, unmanned aerial vehicles, special multi-purpose motorboats and other products for the Russian military and for export.

While Mikhail Kalashnikov actually worked at the Izhevsk Machine-Building Plant, he and his estate actually have no ties to the company. The AK-47's designer had maintained in his lifetime that he had been motivated by service to his country and made no direct profit from the weapon production.

However, he did own a stake in a German-based company that was run by his grandson, which produced merchandise carrying the Kalashnikov name—this included vodka as well as a knife named for the AK-47.

This led to a dispute over the ownership of the AK-47 trademark, which had belonged to the Kalashnikov family until April 2016 when the Kalashnikov Concern was able to obtain the right to the brand.

JSC Kalashnikov Concern also shouldn't be confused with Kalashnikov USA, which was founded in 2015 by the RWC Group. The American company is privately owned and operated to manufacture Kalashnikov-style firearms for law enforcement, military and commercial markets—and it was founded due to U.S. sanctions that banned Russian firearms for import.

Kalashnikov USA is headquartered in Pompano Beach, Florida and there is no connection between the two companies other than the name—but with a name like Kalashnikov that is probably more than enough for gun owners!