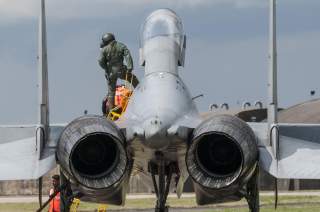 Since striking a landmark nuclear technology treaty in 2005 with New Delhi, Washington has steadily pursued an alliance with India, including technology transfers, modest but growing arms sales, and military cooperation including a 2016 shared basing agreement.

The underlying rationale for that alliance? A desire to buttress India to counterbalance China’s seemingly meteoric rise as an East Asian military superpower. China-India relations never fully recovered from a 1962 war in which Chinese troops seized territory from India on their Himalayan border.

To this day, Indian and Chinese forces face each other across the Line of Actual Control (LAC)—a title which suggests the disagreement over the precise lay out of the 2,521-mile long border between five Indian states and Tibet. Non-violent incursions and confrontations by People’s Liberation Army forces are frequent along the LAC, and China has also heavily built up infrastructure in Tibet to improve access to the PLA, which recently began fielding a new Type 15 light tank designed with the Himalayas in mind.

However, the study Imbalance of Power by the Center for New American Security (CNAS) spells out a stark reality: India’s relative military power vis-à-vis China has only declined in the twenty-first century. For example, by one count India possess around 600 combat aircraft to China’s 1,700; 14 submarines to the PLA Navy’s roughly 60; and 214 rocket artillery systems to China’s 1,550.

There are several systemic problems underlying the shortfall. While India has made strides in some areas, it’s simply not as wealthy and devotes less of its budget to defense spending. Moreover, India’s defense acquisitions process is infamously broken and politicized, with straightforward procurements running decades behind schedule.

India’s “Made in India” requirements for foreign arms sales have often complicated negotiations and results in costly delays and quality shortfalls. And the Indian Army consumes the lion’s share of available funding and devotes it to fielding manpower-heavy World War II-style divisions, instead of funding modernization and expansion of the Navy and Air Force—the latter of which is only at two-thirds of its required combat squadrons.

Recently, the policies of the Modi government may also be weakening formerly consistent support in the United States for the alliance.

The CNAS study authors argue that these problems are unlikely to be resolved in the near term, and as such it’s unrealistic for India to try to match China’s military power symmetrically. Instead, it recommends a number of affordable tweaks to doctrine and procurement that should allow India to better defend its regional ground in two keys sectors: the Indian Ocean, into which the PLA Navy has been slowly expanding, and its Himalayan border with China.

While a companion article looks at strategy on the Indian Ocean in more detail, here we’ll look at the study’s recommendations on how New Delhi can more effectively deter Chinese pressure on its border, and invest in more effective military capabilities in the event of a conflict.

India has significantly built up ground forces in the Himalayas in recent years—particularly with the forming of a second Mountain Corps. However, assets on the border with China are siloed in their respective services and lack a unifying military headquarters to coordinate their activities in a crisis.

Thus the CNAS study argues India should form a Joint Himalayan command the dispersed Army and Air Force units across the huge border under a single authority. This would facilitate more efficient coordination of Indian forces in the region, signal abroad the importance India places on its Himalayan defenses, and allows resources to be redistributed to where they’re needed more quickly.

Likewise, the CNAS report argues the Army should downsizes its large, personnel heavy troops formations dedicated to defending “every inch” of Indian soil, to leaner, faster and more modern formations that can respond flexibly without being tied down to local defensive deployments.

Instead of Tanks in the Himalayas, Invest in Special Forces and Helicopters and Missiles

Currently, India’s strategy to relieve pressure on its Himalayan defenses is to threaten counterattacks into Chinese territory. Towards that end, India has prepositioned mechanized units could launch offensives into Tibet in the event of a war. But though armor may be useful for supporting infantry forces in mountainous terrain, the CNAS study argues it won’t fare well spearheading an offensive.

That’s because the border’s mountainous geography channels possible routes of attack into parallel finger-like corridors, preventing forces in one sector from reinforcing its neighbors. And mechanized forces advancing down those narrow avenues would be highly vulnerable to the precision-attack capabilities of the PLA, potentially resulting in Highway (or rather, mountain pass) of Death scenarios.

The CNAS study instead advocates India double down on its Special Forces branch, and purchases of helicopters that can straddle those mountains such as the CH-47F Chinooks recently received by the Indian Army. Such units could be inserted more easily into Tibet, and due to their lower footprint, would be less vulnerable to the same precision-attack counters.

Standoff precision artillery and missiles like the land-attack Brahmos could likewise threaten PLA positions across the border without having to expose Indian land forces on risky road marches.

While China has built up extensive road infrastructure on its border with India, India has been slower to reciprocate. One issue is that a road intended to facilitate Indian troops movements could just as easily end up aiding the rapid ingress of attacking forces.

However, the CNAS study argues India should commit to infrastructure to improve interior lines of communication and coincidentally boast the regional economy—but rig bridges, roads and even mountain passes with explosives to prevent them from being exploited by invaders.

India’s underfunded air force officially is required to field 42 squadrons—but due to retirements of aging inventory and inadequate procurement of new aircraft, it will fall in strength to just 26 squadrons in the 2020s.

Unless there’s a radical change in funding and acquisition speed, the CNAS study argues the IAF will have to accept the reality that it will field fewer than 42 squadrons. However, by procuring more flexible multi-role fighters that are equally capable of air superiority, strike and even maritime strike missions, the IAF can cover the same missions with a smaller number of aircraft.

The CNAS study also argues that India would disproportionately benefit from investing in electronic warfare, offensive cyberwarfare, and offensive space capabilities (ie, disrupting or destroying an adversary’s satellites). India can draw from a large talent pool of engineers and programmers versed in related civilian domains which it could leverage to neutralize, and thereby deter, advanced networking capabilities developed by China—just as China and Russia have invested in electronic- and cyber-warfare to neutralize advanced U.S. capabilities in communications and sensors.

As robust institution are often required to advocate for development of strong capabilities, the CNAS study argues India should form its own Electronic Warfare agency—just as China has formed its own Strategic Support Force years earlier with a similar portfolio.

While one can quibble with some of the individual recommendations, the CNAS study admirably attempts to be realistic about India’s capability deficits vis-à-vis China, and how those can be offset through affordable investments in asymmetric capabilities.

While Washington may have overly grandiose hopes that India will counter-balance China’s rise, Indians and Chinese alike will probably be happy if neither country has reason to come to blows over Himalayan mountain passes. A more robust Indian defensive strategy along the LAC should hopefully deter Chinese pressure that could result in armed conflict.