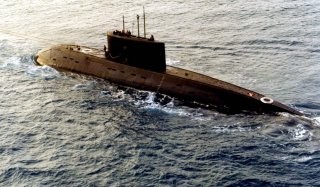 Over the past three decades, the Myanmar Navy has increased from a small force that could have been described as a “brown water navy” that did little beyond patrol the immediate coastal regions and rivers of the Southeast Asian nation, to one that has expanded to become a true “blue water navy.” It currently has more than 19,000 personnel and operates more than 125 vessels as it has expanded to take on a more active role in the defense of its 1,930 kilometers of its extended coastline and more than 520,000 square kilometers of its vast exclusive economic zone (EEZ).

While it was founded as the Navy of Burma in 1940 and played an active part in the Allied operations against the Japanese during World War II, it has never operated a submarine—a true testament to any blue water naval force.

Now it appears that India will rectify that shortcoming as it prepares to provide the Myanmar Navy with a Cold War-era Kilo-class diesel-powered submarine. The boat is one of a number that India purchased from the Soviet Union and later Russia in the 1980s and 1990s.

“We understand that this will be the first submarine for the Myanmar Navy,” Indian External Affairs Ministry spokesman Anurag Srivastava told reporters earlier this week.

India and Myanmar signed an agreement on maritime security cooperation and already carry out joint patrols. India has also invested over $1.2 billion its Asian neighbor and recently New Delhi approved an additional investment of more than $120 million in the Shwe Oil and Gas project.

The transfer of the submarine and the investment in Myanmar is in line with New Delhi’s “Neighborhood First” and “Act East” policies. The move also comes as China has increased its footprint in the Indian Ocean Region (IOR), while India and China are locked in a standoff along the Line of Actual Control (LAC) in the Ladakh Valley region since earlier this year.

The class was built more or less continuously for thirty years, which is a notable testament to their effectiveness at sea. The submarines measure just 238 feet long by thirty-two feet wide and displace 3,076 tons submerged. The boats are powered by two diesel generators and an electric drive, giving them enough power to make ten knots at the surface and seventeen knots underwater. The ship has a crew of just twelve officers and forty-one enlisted men, while it has an endurance of forty-five days before needing to be resupplied. It has a range of 7,500 nautical miles.

The Indian Navy currently operates around ten of the submarines as the Sindhughosh-class, and these underwent a refit and upgrade under a deal with Russian shipbuilder Sevmash. It is the INS Sindhuvirthat is being transferred to the Myanmar Navy. It was commissioned into the Indian Navy in August 1988 and was decommissioned in March of this year following a refit at the Hindustan Shipyard.