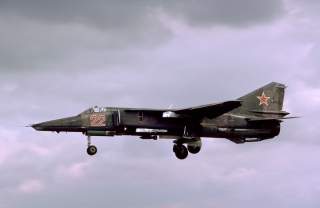 On December 27, 2019 the Indian Air Force bade farewell to the last of the beefy MiG-27 attack jets it had dubbed the Bahadur (“Valiant”) in a ceremony held by No. 29 squadron at Jodhpur air station.

A companion article describes the unique characteristics of the Mikoyan i Gurevich MiG-27, a ground attack variant of the MiG-23 supersonic swing-wing fighter armed with a six-barrel 30-millimeter Gatling cannon so powerful that its firing vibrations routinely cracked fuel tanks and blew away landing lights. This piece focuses on the type’s service and unique combat experience in the Indian Air Force.

In the mid-1980s, India’s Hindustan Aeronautic Limits (HAL) struck a deal to assemble their own slightly downgraded MiG-27ML jets, eventually producing 165 of the jets through the mid-1990s. India was already an operator of the similar but less sophisticated MiG-23BN ground attack jet.

While the MiG-27 was not particularly agile, Indian pilots appreciated its speed, powerful weaponry and the flexibility of its swing-wings.

“It handled nicely, although it was heavier than the MiG-21… She was very fast at low-levels, and her ability to hold steady was superb. With wings swept back fully and speeds exceeding 1000 km/h at low levels, the wings waggled and the noise and vibrations that set in gave an impression of a banshee just freed, screaming with abandon.”

The Bahadurs saw extensive action during the 1999 Kargil War in which Indian troops drove out Pakistani army troops that infiltrated across the Line of Control in the high peaks of the Himalayas. Using only unguided weapons in the conflict, the Indian MiGs were assigned not only to strike mountain top outposts, but asked to use their bombs to trigger avalanches that would cut off Pakistani lines of communication and retreat.

However, on May 27, the MiG-27 of Lt. Kambampati Nachiketa of No. 9 squadron experienced an engine flameout during a strafing and rocket attack near Batalik—possibly due to ingesting gasses from 80-millimeter rockets fired from above their recommended operating altitude. Unable to restart his engine, Nachiketa was forced to eject.

The escorting MiG-21 of Squadron Leader Ajay Ahua swooped down to ascertain his position—only to be shot down by a man-portable heat-seeking Stinger missile. Though Ahua successfully ejected, he was then apparently tortured and executed. Nachiketa was captured two hours later and repatriated on June 3.

Following these losses, the Indian Air Force adapted its tactics. A study of the Kargil air war by Benjamin Lambeth concluded “Because of their rudimentary bomb sights, the inaccuracy of their unguided weapons, and the ruling against crossing the Line of Control, MiG-21, MiG-23, and MiG-27 pilots typically achieved only limited effectiveness when attempting to provide close air support against enemy point targets.”

Rather than dive-bombing and strafing targets with cannon fire and rockets, the IAF improvised by installing hand-held GPS devices and using them to execute accurate level bombing attacks from high altitude outside the engagement range of Pakistani heat-seeking missiles.

An Indian air chief described the “somewhat ad hoc system” to Lambeth thusly: “With the target coordinates available, on approach to the target, pilots dropped their bombs at the determined distance from the target. We knew that if the coordinates were accurate, the results would be reasonable.”

Accuracy, of course was not guaranteed—at one point, photo reconnaissance revealed that a strike by six jets had precisely planted ten out of twelve bombs targets—but on inaccurate coordinates!

To improve accuracy, the GPS-assisted bombing tactic was used at very low altitude at night, as darkness made it difficult to spot the jets.

Air Marshal Patney told Lambeth “…we resorted to night operations in those forbidding hills and at low levels of around 500 feet, something never done before anywhere in the world and that also with aircraft that had no modern aids and in an area where no radars could operate.”

Further modernization including new engines and inflight refueling capability was also considered, but was ultimately rejected.

Despite the partial fleet upgrade, India’s Bahadurs suffered frequent problems towards the end of their service lives, particularly due to their powerful but aging R-29 engines which was known to combust. As Mainkar wryly stated in his interview, “In my opinion, it is the only fighter which has ‘engine explosion’ as a standard aircraft emergency.”

Since 2001, sixteen were lost in accidents, including two fortunately non-fatal crashes in 2019 alone.

The retirement of the MiG-27s leaves India with just twenty-eight squadrons out of a target strength of forty-two due to New Delhi’s dysfunctional procurement process and nearly two decades of dithering on selecting replacement aircraft.

With the retirement of India’s MiG-27’s, Kazakhstan remains the type’s sole operators, with twelve officially still in service.