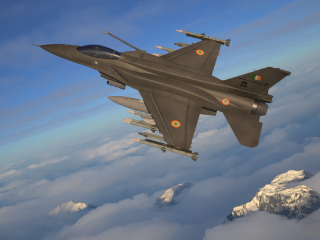 The F-21 is engineered for India and intended to greatly expand the country’s subsystem contracting, production and technological development.

“The F-21 addresses the Indian Air Force’s unique requirements and integrates India into the world’s largest fighter aircraft ecosystem with the world’s pre-eminent defence company. Lockheed Martin and Tata would produce the F-21 in India, for India,” a Lockheed statement says.

A report from Forbes cites Indian Air Chief Marshal R.K.S. Bhaduauria, head of the Indian Air Force as saying they plan to buy the F-21

So what might this mean to India, growing military power and U.S. ally seeking to counterbalance Chinese military strength on the Asian continent?

The upgraded F-16s change the equation with regard to India’s air attack options, potentially giving the country a new rival to the Chinese J-10. J-10 upgrades over the years have closed the technological superiority gap between the Chinese fighter and 4th-gen U.S. aircraft such as 1980s-built F-16s and F-15s, according to a 2014 U.S.-China Economic and Security Review Commission.

While export variants are typically different in a number of key respects than platforms built for the U.S., the Lockheed F-21 likely parallels a number of essential F-16 upgrades that have been underway with the U.S. Air Force for many years. Interestingly, the Air Force - Lockheed F-16 Service Life Extension Program integrates several F-35 technologies, such as AESA radar.

The new AESA radar can track up to 20-targets at one time, Randy Howard, Lockheed Martin F-16 Director of Strategy and Business Development, said in an interview last year.

“The F-16 is a much more capable weapon due to the AESA radar. We are taking lessons learned from the F-35 and rolling them back into the F-16. The ASEA is able to see a wide area laterally, horizontally, diagonally and vertically,” he said.

Howard added that the upgraded F-16s are getting a modern, state of the art targeting system and sniper system along with clear graphics and video into the cockpit. “Pilots can see targets farther,” Howard said.

The F-21 is closely aligned with the extension of a special Lockheed-built “foreign” variant of the F-16 called the F-16v; the new variant does include some technologies quite similar to the upgraded U.S. plane, such as advanced computer displays and high-definition cockpit systems along with new EW technologies, missile warning sensors and a helmet-mounted cueing system. The “v” model also incorporates onboard automation intended to ease what is often referred to as the “cognitive burden” for pilots, freeing them up to focus more intently on important decision-making and flight dynamics because a number of key procedural functions are performed automatically.

Part of the F-16 automation includes the use of a computerized Ground Collision Avoidance System, a technology that uses computer algorithms to autonomously re-route the plane in the event that a pilot is incapacitated. The computer system can, for instance, take over flight of the plane to avoid a collision with the ground, building, or other structure. So far, Air Force and Lockheed officials report that the program has already saved seven lives and billions in aircraft costs.