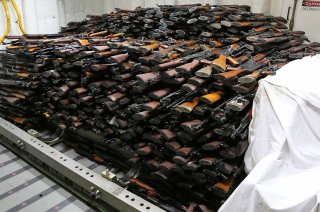 India’s Defense Ministry has given final approval to a joint venture for the licensed production of over 600,000 Russian Kalashnikov AK-203 assault rifles. The deal is now valued at around $590 million, almost $100 million less than the $688 price tag previously reported by Janes. Citing Indian defense industry insiders, Russian news outlet RBC reported that the new valuation is reportedly the result of logistical and supply chain optimizations.

The AK-203 is an export variant from the AK-100 family of rifles, chambered in 7.62х39. The Kalashnikov rifle boasts across-the-board performance improvements over the notoriously unreliable 5.56×45mm NATO Indian Small Arms System (INSAS) rifle that currently serves as the mainstay of India’s armed forces, including a lighter weight, shorter length, and modern ergonomics. The AK-203 promises to alleviate the frequent jamming and overheating issues reported by INSAS operators.

“A lot of preparatory work was done, during which Russian specialists worked with Indian partners to develop effective production models,” Bekkhan Ozdoev, the industrial director of Rostec’s weapons cluster, told Russian media. “This made it possible to optimize production outlays to the tune of tens of millions of dollars.” The deal involves a total of 680,000 AK-203 rifles. Of these, 70,000 will be delivered from Russia to India within three years. The remaining 610,000 rifles will be license-produced by the joint enterprise Indo-Russia Rifles Private Limited (IRRPL), a manufacturing facility in the town of Korwa to India’s northeast. These rifles are projected to be produced within a ten-year period. The prospective deal would make India the first foreign country to license-produce the AK-200 series of assault rifles. Local production is slated to begin in the first quarter of 2022.

Former Brigadier Rahul Bhonsle of Security-Risks, a defense management consultancy in New Delhi, told the defense intelligence publication Janes that the contract was held up by a dispute relating to royalty payments. “After months of extensive negotiations, Russia had opted to waive the royalty clause in the contract in keeping with India's demands,” Bhonsle said.

New Delhi is a long-established customer of Russian military hardware harkening back to Soviet times, but Moscow has historically struggled to break into the Indian small arms market. Russian defense industry insiders familiar with the negotiations say that the joint production deal is distinguished by “an unprecedented [degree] of localization and speed of technology transfer[s],” with the enterprise projected to reach a 70% localization rate within the first thirty-two months, according to Janes. All of the rifle’s components are required to be locally sourced within eighteen months.

The AK-203 joint production venture is expected to be formalized during Russian president Vladimir Putin’s state visit to India on December six.