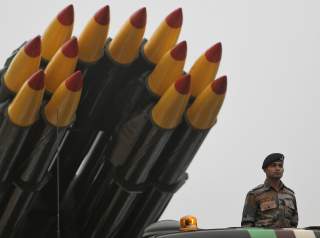 “One target among simultaneously incoming multiple targets was selected on [sic] real time, the weapon system radars tracked the target and the missile locked on to it and intercepted the target with a high degree of accuracy,” India’s government announced in a press release.

The test was against a medium-range ballistic missile with a range of 1,500 kilometers. Franz-Stefan Gady of The Diplomat speculates that this was the first test of the new indigenous imaging infrared (IIR) seeker, which was developed to help the interceptors distinguish warheads from decoy/dummies.

The most recent test was overseen by the Defense Research Development Organization (DRDO), the premier defense technology agency within India’s Ministry of Defense. It took place at Abdul Kalam Island, Odisha in the Bay of Bengal.

The AAD is a single-stage solid-fueled hit-to-kill interceptor missile that destroys hostile missiles in the terminal phase of flight. The press release says it is capable of destroying targets at altitudes of 15 and 25 kilometers.

The AAD had been tested at least five times before this most recent one. Those include tests in December, March and February 2017 as well as one a piece in 2016 and 2015.

The Diplomat’s Gady says the earlier tests were all against Prithvi-II or III short-range ballistic missiles. Given the range cited in the press statement, the test this month was against a different and more powerful missile.

There was increased chatter that a deal was imminent in December 2017. "We hope that the S-400 deal will be signed with India soon," Russian Vice-Premier Dmitry Rogozin said late last year.

Around the same time, Viktor N. Kladov, director for international cooperation and regional policy of Rostec, a massive Russian conglomerate, made similar comments, saying that negotiations over the S-400 had reached a “very profound stage.”

It appears that this sale might have been slowed because of fears that the United States would sanction India for purchasing the Russian system. The recently passed 2019 National Defense Authorization Act (NDAA) provided a waiver for India from Russia related sanctions. Thus, the deal might soon go through.

India also recently announced it would spend $1 billion to purchase a National Advanced Surface to Air Missile System-II (NASAMS-II) to protect the capital city of Delhi. Built by the U.S. firm Raytheon and the Norwegian company Kongsberg Defense and Aerospace, India intends to use the NASAMS to deal with cruise missile and other aerial threats against the capital.

“Once the Phase-I of the BMD [ballistic missile defense] system is operational,” a source told the Times of India, referring to the AAD and Prithvi systems, “it will be deployed to protect cities like Delhi and Mumbai... The NASAMS, in turn, is geared towards intercepting cruise missiles, aircraft, and drones.”

Washington, DC is also protected in part by the NASAMS.