An Inside Look at the Israeli-U.S. F-35 Flight Drills that are Transforming Both Air Forces 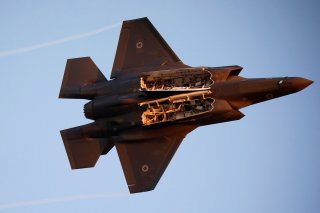 Pilots from the U.S. and Israel air forces recently completed their second joint exercise in a year using fifth-generation F-35 warplanes. The unique partnership is now progressing toward more drills together using this aircraft which only a handful of countries in the world possess. The joint drills are helping American and Israeli pilots get to know each other better, despite the coronavirus crisis, and learn about how to get the most out of their aircraft.

An interview with an Israel Air Force officer knowledgeable about the recent flights provides a unique insight into what Israel and the United States are doing. “We executed this week the second time in four months the same exercise with a U.S. squadron,” the officer, who cannot be named for security reasons, says. The U.S. pilots have flown to Israel from Central Command’s area of operations in the Gulf. “They were here according to our annual common plan between air forces we planned to execute this Enduring Lightning exercise of F-35s from both countries and also from the Israel Air Force.” The Israelis provided an air control Gulfstream G550 which can be used for airborne early warning and control while the United States brought a KC-10 refueler.

The drill concentrates on the F-35 fighter jet’s unique functions. F-35 jets are full of sensors and can process a tremendous amount of data that makes them dominant over previous generations of aircraft. They use algorithms and computer technology processes that also mean flying them with previous generations of aircraft may not be optimal, so for instance a joint exercise with a foreign air force that has F-16s may not be as beneficial for joint work as flying them with other F-35 operators.

The Israeli official discussing the recent joint drills with the United States says that the second iteration of Enduring Lightning built on lessons learned from the first. The first joint flight faced relatively simple air-to-air missions and air-to-ground attacks against multiple surface-to-air-missile threats and other ground-to-air threats. This time the air forces improved communications work together. “The F-35 has many communications systems and some of them are quite complicated and we managed to proceed and connect all the communications types between us and this is the first time we did this and hopefully it will be much easier [next time].” The Israelis say the relations and the integration between the air forces will improve in the coming months as plans are in place for a third exercise.

“We are working together all the time and we did that last year with the British F-35s from Cyprus and also with the Americans and Israel last year and with the Italians in Blue Flag and also two times this year,” says the Israeli Air Force officer. He points out that Israel was the first country outside the United States to operate the F-35 operationally. “We have a really good experience with the F-35 and its special qualifications.” Coronavirus has cast a shadow over the drills because pilots cannot meet in person and must instead use video.

The two drills so far this year and plans to do more in the future appear to show Israel and the United States are now doing unprecedented levels of cooperation. This second drill was a big step for the F-35 project, the Israeli officer says. The F-35 has provided the opportunity for this integration because it is a unique aircraft and so few air forces operate it at the level Israel and the United States do. Many of the systems on the aircraft are classified, but because the aircraft is known to be a data sponge the issue of networked communications is linked not just to pilots speaking to each other, but the way the jets share information. “This aircraft enables us to communicate in many classified ways and use common language in systems and operate the same aircraft and deal with new missions that this fifth-generation can do for the first time in history,” the Israelis say.

This is in contrast to previous generation aircraft, such as the F-16 and F-15 warplanes, which both Israel and the United States operate. They have different systems and there isn’t an opportunity to learn the same lesson from them doing joint drills. For instance, Israel has had F-15 jets since 1976 and F-16 jets since 1980. Although these aircraft have been updated since then, and the United States is currently working on the F-16V jets, the F-35 fighter aircraft is a whole new era of warfighting ability.

The future looks like not only more joint drills but also improving U.S. and Israeli aircrews and the small fraternity of pilots that fly these F-35s such that they can execute more complex missions in the future. Israel won’t comment on how the joint work might be related to increased Iranian threats and tensions in the region. The same week of the recent drills Israel was facing off against Hezbollah threats. U.S. aircraft from Al-Dhafra, where the F-35s have deployed three times in the last two years in a constant squadron rotation from Hill Air Force Base, have faced Iranian threats in the Persian Gulf and Gulf of Oman. Iran shot down a U.S. Global Hawk drone in June 2019 and used drones and cruise missiles to attack Saudi Arabia in September.

The United States also doesn’t have other air forces in the region to drill with using F-35s. When Israel and the UK met the UK F-35s had to deploy to Cyprus. Turkey was supposed to receive F-35s but Ankara’s decision to purchase S-400 air defense systems from Russia has put the F-35 program on hold with Turkey. That leaves Israel and the United States as the key operators of the aircraft in the region. Israel has technically been linked to U.S. European Command over the last decades, just as Turkey is, whereas the rest of the Middle East falls under the U.S. Central Command. The recent F-35 drills with squadrons in U.S. CENTCOM also illustrates the way the previous anomaly of Israel-EUCOM relations is increasingly recognized such that Israel is training with units that are more logical due to their geographic proximity and facing similar threats.

Israel foresees more joint drills with its F-35s in Europe and possibly in the United States in the future, such as possible work with the U.S.-based Red Flag exercise. That would be a big step, the Israeli officer acknowledges. Operating far from Israel’s usual neighborhood would be complex and challenging. Israel has refueling aircraft, such as its Boeing 707, and it is seeking new KC-46 refuellers from the United States in the future. Using those for a long-distance deployment would be a major deployment for Israel. For now, the joint work with the U.S. F-35 jets are already advancing the know-how of pilots from both sides and deepening the relationship between Jerusalem and Washington.