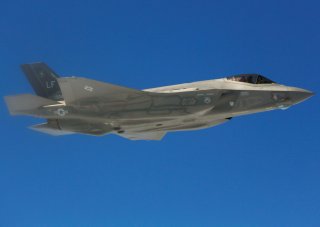 Israeli and U.S. F-35s drilled together for the second time in six months during a military exercise. This joint drill occurred in the shadow of growing Israel-Hezbollah tensions. Dubbed Enduring Lightning 2, the drill on August 2 involved the U.S. 421st Squadron and Israel’s F-35I Adir fighters. Israel now has two F-35 squadrons and Israel’s 140th squadron flew alongside its U.S. peers.

Israel plans to acquire at least fifty of the American-built fifth-generation warplane. Israel’s orders of F-35s have been arriving since 2016 and this coincides with an increase in Israeli airstrikes designed to reduce Iranian entrenchment and threats from Syria. In May 2018, Israel said its F-35s had conducted their first combat missions. Since then, the Israeli Air Force has continued to use its new stealth fighters in many missions. For example, Israel’s former Chief of Staff Gadi Eisenkot said in January 2019 that Israel has carried out more than 1,000 airstrikes against Iranian targets in Syria.

In March, amid the coronavirus pandemic, Israel and the U.S. held their first joint F-35 exercise. During that drill, Israel’s 140th squadron practiced with the U.S. Air Force 34th squadron. In addition, Israel’s Nachshon Gulfstream G-500 aircraft were used as a part of the practice session as air control. At the time, not all of America’s 34th squadron was present. Some of its elements were in Al-Dhafra in the United Arab Emirates and others still at its home base in Hill Air Base in Utah. Israel’s second F-35 squadron, announced in February and called the 116th Lions of the South, also apparently did not participate.

According to the Israeli Air Force, Enduring Lightning 2 was hailed for being the second of its kind in a year. It illustrates a growing tempo of drills and high-level U.S. visits to Israel, even amid the pandemic. U.S. Joint Chiefs head Mark Milley was in Israel on the eve of the drill in late July. According to flight-tracking data on August 2, a U.S. Air Force McDonnell Douglas KC-10 fuel extender operated from the UAE flew over Israel and then returned. The KC-10 tanker performs an important role in helping America’s F-35s refuel and extends their range.

The Israelis again used their Nachshon air control aircraft and the drill involved confronting different air and ground threats. The pilots used a joint communications system to locate and destroy threats during the drill, Israel says. The object was to do this despite the coronavirus crisis in order to maintain maximum operational readiness. Both the United States and Israel face Iranian threats across the region.

For example, Iran conducted naval drills, destroying a scaled-down model of a U.S. aircraft carrier in July. Meanwhile, Iranian-backed groups continue to fire rockets at U.S. forces in Iraq and Israel has faced tensions with Iranian-backed Hezbollah. On July 20, a Hezbollah member was killed in Syria and Hezbollah blamed Israel. Israel then thwarted two terror attacks on its borders, one from Lebanon in late July and another on August 3. Israel responded with airstrikes against Syrian regime targets. Jerusalem says it holds Damascus responsible for any attacks from Syria. In the past, there have been Iranian-backed drone and rocket attacks from Syria.

This isn’t the first time that Israeli and U.S. pilots conducted a drill while real-time threat events were unfolding on Israel’s border. A ten-day drill with Greece, Italy, Germany, the United States and Israel in November 2019 called Blue Flag took place during Israeli airstrikes on Gaza. At the time Russia asserted that Israel had carried out airstrikes in Syria and flown over Jordanian airspace to conduct those strikes on November 18.

The Blue Flag drill illustrated Israel’s close relationship with European countries and was a sign to regional powers of Israel’s capabilities. That drill also involved U.S. jets flying from Spangdahlem Air Base in Germany, which were part of the 52nd Fighter Wing that also flies F-16Cs. Meanwhile, Italy brought six of its F-35s to the Blue Flag drill.

This means that Israel has now conducted three joint exercises with its own fifth-generation aircraft, meaning Israeli pilots among the most experienced using their F-35s with other countries. Besides America, Israel and Italy, current users of the F-35 include Australia, Japan, the Netherlands, Norway, South Korea and the United Kingdom.