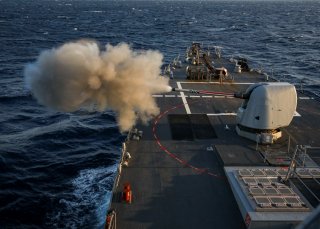 In the near future, U.S. Navy ships will be firing massive, high-powered, scalable lasers to strike enemy vessels, destroy drones, and possibly even burn through the metal of an inbound ballistic missile. Future surface ships will also be operating new generations of sensitive, long-range, high-energy-density radar systems thirty-five-times more precise than existing systems. For their part, destroyers, cruisers, and other warships will be firing larger, faster, longer-range, and more precise missiles. They will also field new deck-launched hypersonic weapons, sensors, and high-speed, AI-enabled computing and command and control systems. All of these innovative systems will change current paradigms for maritime warfare by exponentially improving the lethality and range of multi-domain networks.

Technological advances have enabled developers to engineer weapons with greatly improved capacity, however, many of them rely upon greater amounts of expeditionary power. Therefore, for years, the Navy’s developers have been focused on identifying innovations which support the need for expeditionary high-density energy output, storage, and distribution. A ship's electric drive propulsion system can help meet this need, which is part of why electric-drive systems are built into Navy’s Zumwalt-class destroyers and other surface platforms. Additional on-board power-generation capacity, fortified by large generators, can also be measurably enhanced by innovations with improved on-board power management technology.

This explains why Northrop Grumman is refining and upgrading its Integrated Power and Energy System (IPES) solution: a technology engineered to store, manage and efficiently distribute electrical power onboard warships. Using an energy magazine, IPES is able to aggregate, store, and distribute electrical power as needed to multiple systems from a single location. Otherwise separated technologies on board a ship (such as radar, weapons, or computing) typically draw power from different individual systems, something which increases weight and space and results in resources dedicated to one load that otherwise cannot be utilized. IPES is intended to optimize and massively improve expeditionary, shipboard power while increasing distribution efficiency and greatly lowering the hardware footprint. This dynamic, which the military refers to as SWAP (for Space, Weight, and Power), seeks to address the difficulties of finding sufficient “space” on a ship given the number of systems it needs to support.

“Multi-function power systems have SWAP savings and will start to extend the capability by managing the energy flow within the various pieces of the system,” Matthew Superczynski, chief engineer for Northrop Grumman’s Power/Control Systems, told The National Interest in an interview.

Northrop’s push for sustained modernization with IPES is aimed at meeting Navy requirements as they evolve and aligning with the service’s modernization and warfighting strategies.

These strategies, which were outlined in detail at the Navy’s Sea Air Space (SAS) Symposium by Ryan Moore, the deputy major program manager for Integrated Weapons Systems, seek to expedite breakthrough modernization through a continuous maturation process enabled by progressive technological enhancements. This is designed to both bring optimal solutions in the near term while also place platforms on a course for fast-paced modernization.

“As opposed to spending all this money and time to develop an integrated set of tools that our warfighter will need 60 years down the road, what we want to do is rapidly develop and build,” Moore said at SAS.

As part of this discussion, Moore emphasized a need to deliver optimal systems as the “point of sale,” while also placing systems on an auspicious path to rapid modernization over time through the use of common technical standards.