The Navy's 2023 Budget Doubles Down on Underwater Drones 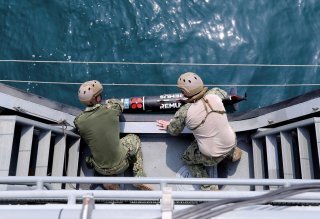 In recent years, Navy modernization has been characterized by a highly-visible and important uptick in unmanned systems development and production. The Navy’s recently released 2023 budget is no exception, and the service’s request to procure as many as twenty-two small and medium undersea vehicles continues this emphasis on unmanned systems.

The massive expansion of the Navy’s undersea drones program is consistent with the Navy’s heavily emphasized Distributed Maritime Operations (DMO) strategy. The strategy calls for a dispersed but highly networked force of manned and unmanned systems capable of sharing time-sensitive targeting and reconnaissance data across the force in real-time. The networking is also intended to be multi-domain, which would allow undersea drones to connect with surface ships and even air assets such as helicopters. For instance, an undersea drone could share intelligence with a helicopter as it lowered sonobuoys into the water for mine and submarine hunting operations. In keeping with the Navy’s DMO strategy, a greater number of unmanned vehicles will support the Navy’s strategic call for “distributed” operations, as less condensed maritime forces are less vulnerable to destruction by enemy forces.

Some aspects of undersea sonar and drone synergy are greatly improved by new levels of autonomy and semi-autonomy. This allows undersea drones to find, identify, and ultimately destroy enemy mines autonomously when they are directed to do so by a human. For example, a submersible Raytheon-built AQS-20 undersea sonar system can network with a semi-autonomous, mine-exploding Barracuda drone. Raytheon explains that the AQS-20 is a submersible cylinder-like system with four built-in sonars used to find mines from the “sea-floor to the near-surface in a single pass.”. It operates with side-scanning synthetic aperture sonars, a “wide-band” forward-looking sonar, and a “digital gap” filler sonar to identify mines underwater. The AQS-20 uses acoustic ID technology and advanced automatic target recognition to generate high-resolution renderings of threats.

Navy documents further specify that the Barracuda will use wireless communications, allowing for a “tetherless” operation with the Mine Countermeasures Unmanned Surface Vehicle (MCM USV). Navy statements indicate the Barracuda will first deploy from Littoral Combat Ships before potentially migrating to other surface or airborne platforms.