The Navy Is Going All in on Drone Technology 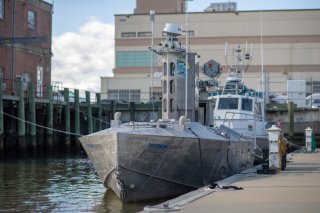 The Navy’s explosion in drone technology is gaining momentum and making progress at a staggering rate. The service is currently testing, refining, and building an array of undersea mine-hunting drones, Unmanned Surface Vehicles (USVs), and drones that resemble mini-submarines.

Manned-unmanned teaming, which has received much attention from every branch of the military, also extends to the air. The Navy is working to forge a cross-domain joint warfare synergy to dominate every battlespace. This means that large Unmanned Underwater Vehicles like the ORCA will be networked to the Medium Unmanned Surface Vehicle, the Fire Scout aerial drone, and mine-hunting USVs in support of manned ships that will have decision-making authority.

This concept—linking sensors to shooters in real time—is the thrust of the Navy’s current strategic thinking. Work in this area, which is primarily led by the Office of Naval Research, has been going on for many years. As a result, the Navy has developed ever-increasing levels of technological autonomy and made advances in AI-enabled operations. Now, the service is fast-tracking a series of networking technologies, protocols, interfaces, and datalinks to enable real time, multi-domain connectivity to stay ahead of an enemies’ decision cycle. While these successes are promising, it will be challenging for the Navy’s drones to overcome the difficulties of undersea-to-surface networking. However, significant progress is being made with systems such as the Barracuda undersea drone, which can wirelessly and semi-autonomously find and destroy mines.

All of these efforts are part of Project Overmatch. This conceptual and doctrinal effort to ensure superiority in the realm of maritime warfare is directed by the Chief of Naval Operations. Capt. Pete Small, the Program Manager for Unmanned Combat Systems, regularly talks about the strategic imperatives that Navy developers now embrace.

“Project Overmatch is to develop conductivity … any sensor, any shooter, we've got to exchange data, we've got to have data, we've got to have secure networks. And then we need the force and a distributed force to go share that information and prosecute it,” Small said while speaking to an audience at the 2022 Surface Navy Association Symposium. In recent years, Small has shepherded through the development and testing of a wide range of unmanned systems with a consistent emphasis on networking and engineering a common set of interfaces to enable advanced warfare connectivity.