The Navy is Using Underwater Drones and Sonar to Hunt Mines 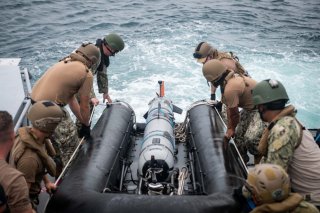 The AQS-20 is a towed system equipped with four sonars that are capable of finding mines from the “sea-floor to the near surface in a single pass,” according to Raytheon. It operates with side-scanning synthetic aperture sonars, a wide-band forward-looking sonar, and a “digital gap” filler sonar. The AQS-20 uses advanced automatic target recognition and acoustic identification technology to generate high-resolution renderings of threats.

The initial solicitation for the Barracuda sought a “modular, low-cost, semi-autonomous, expendable neutralizer.” Mine neutralizers are miniature underwater armed drones that are used to destroy naval mines. Navy documents specify that the Barracuda will use wireless communications to allow for “tetherless” operation. Barracudas will first be deployed from Littoral Combat Ships before potentially migrating to other surface or airborne platforms.

Raytheon has already delivered ten AQS-20Cs to the Navy. In addition, Raytheon was recently awarded a $68 million contract to upgrade ten AQS-20A systems into the improved AQS-20C configuration. The AQS-20C’s advanced processing capabilities greatly enhance its ability to generate images from acoustic data and identify mines. These advancements allow the Navy to carry out mine-hunting operations much faster. The faster a mine can be accurately identified with advanced detection algorithms and fast processing speeds, the more efficiently and safely it can be destroyed or avoided.

Frank Linkous, associate director of Raytheon’s Undersea Warfare Systems program, told the National Interest that the AQS-20C’s capabilities will make it the “foundation of future in-stride mine clearance” for the Navy. Linkous explained that the upgraded Barracudas will integrate with Textron Unmanned Surface Vessels to optimize mine detection operations.