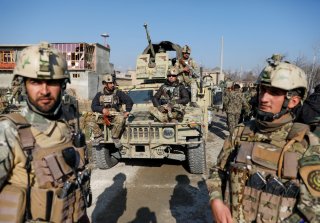 However, a closer look indicates that rather than being realistic and constructive, such thinking is self-deception and an overhaul would be self-defeating.

While ANDSF is trained with the mentality of saving innocent lives and defending the country, Taliban fighters’ main mantra is dying to destroy, kill, and win. It is literally impossible to bring in the Taliban fighters who have listed themselves for suicide attacks and suicidal missions to share the barracks with the Afghan security forces, who the Taliban believe are semi-infidels.

Taliban fighters’ preferred modus operandi is killing ANDSF members whenever they can, and beheading them if time allows. The last thing the Taliban would do is to capture ANDSF members alive—unless they need ANDSF captives for a prisoner exchange.

Meanwhile, Taliban fighters’ violent nature and destructive skills are neither welcomed nor needed in a conventional security establishment. Their irregular appearance and traits are hard to comb-over. And finally, their bonding with terrorist groups and affiliations with regional intelligence organizations are hard to ignore and poses the greatest threat to ANDSF institutions.

Afghanistan is already struggling to maintain its current security forces of nearly 400,000 personnel despite hefty international contributions and special financial packages for the ANDSF. The war-torn country can barely fund 10 percent of its annual defense budget of nearly five billion dollars from national resources; the United States and NATO allies shoulder the rest. Therefore, expectations are that a peace deal would allow a reduction in the ANDSF’s size because the country won’t be able to sustain the current level of forces without international aid over the long run.

In such circumstances, accommodating the Taliban fighters in ANDSF institutions is literally impossible. Already on the verge of leaving Afghanistan, the U.S.-led international community is highly unlikely to commit to sponsoring a very large Afghan security and defense establishment. Nor can they justify laying off tens of thousands of the ANDSF members, who have been guarding Afghanistan with their lives, to accommodate the Taliban fighters, who were killing Afghans and enabling other terrorist groups as well as regional intelligence services in destroying Afghanistan.

Doing so would not only cause internal opposition and backlash but would also provide an opportunity for spoilers and other terrorist groups and networks to exploit.

And lastly, ANDSF is not a politicized amalgamation of militias belonging to anti-Taliban groups and parties, and therefore, the Taliban fighters must be brought in to join the band and counter-balance their influence.

Built from scratch, ANDSF is an apolitical, professional, and highly diverse force representing multiethnic Afghanistan and serving the nation and country without any prejudice and discrimination. Reconstituting the ANDSF institutions to accommodate the Taliban fighting force—who have very strong allegiances to their ideology and leadership, and undisputed ties with Pakistan’s military and intelligence establishment—would not only politicize these institutions but also raise alarm both domestically and regionally.

Domestic forces would see the ANDSF overhaul as the Talibanization of Afghanistan’s security institutions, whereas for regional countries such a move would mean handing over the ANDSF institutions to Pakistan and extending its hands beyond its borders. Irritating internal and external forces does not bode well with the idea and hope of a lasting peace in Afghanistan.

Integrating the Taliban fighters—a pro-Pakistani force who know nothing but terror, assassination, and destruction—with the ANDSF would not only degrade, demoralize, and politicize the only inclusive, professional, and apolitical institutions the country have, but could very well be a prologue to the ANDSF’s disintegration.

Overall, one can safely conclude that the real danger and threat to ANDSF institutions is not the Taliban offensive and destructive campaigns, but rather the long-term sustainability of these institutions without foreign aid. Second, at their current state and nature, the Taliban fighters are neither prepared for nor of any use for regular defense and security establishments. And lastly, the so-called unification of Taliban fighters with the ANDSF would continuously pose an existential threat to Afghanistan’s security institutions.

This doesn’t, however, mean that the Taliban fighters should be barred from joining the ANDSF institutions. They should be given the opportunity to become part of the Afghan armed forces and intelligence establishment after going through necessary procedures—disarmament, demobilization, and reintegration—and standard vetting processes. Why? Apolitical, impartial, and professional security forces and institutions are paramount to defending the state, upholding the constitution, and respecting the will of the people.

Critically, if the Taliban are serious about a lasting peace, an inclusive government representing multiethnic Afghanistan, and more importantly, not imposing their will on the rest of the country’s overwhelming majority, then why do they want to preserve their military power and capabilities in reconstituted ANDSF institutions?

Ghulam Farooq Mujaddidi is a Kabul-based independent researcher, Fulbright scholar, and Protective Security Expert with over a decade of experience in the Afghan government security sector. His research interests extend from state-building challenges in war-torn countries to insurgency and suicide attacks, with a particular focus on Afghanistan.

What Motivates the Taliban?