Iran and America Square Off in Iraq Amid Coronavirus Concerns 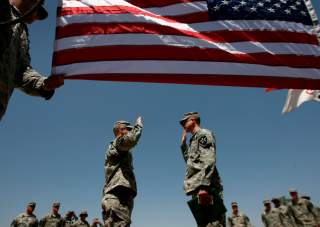 U.S. forces struck Iranian-backed militia targets in Iraq on Thursday, a day after a rocket attack killed U.S. troops and a British serviceman at Camp Taji.

The last time such a clash occurred, it set off a chain of escalation that ended with the assassination of an Iranian general and a massive ballistic missile strike that wounded fifty U.S. troops. But this time, the two countries seem preoccupied with COVID-19, a mysterious new coronavirus disease that originated in China at the end of last year but is now causing chaos in both the United States and Iran.

The House of Representatives voted late on Wednesday to block a war with Iran, while the Iranian government took the unprecedented step of asking the International Monetary Fund in Washington for assistance. President Donald Trump is expected to veto the war powers resolution, which passed the Senate last month. In the meantime, U.S. forces have begun their retaliation.

"Earlier this evening, the United States conducted defensive predicion strikes," the Defense Department announced on Thursday night. "These strikes were defensive, proportional, and in direct response to the threat posed by Iranian-backed Shia militia groups."

U.S. Defense Secretary Mark Esper earlied signalled that retaliation would not extend to Iran itself, telling reporters that "we are focused on the groups that we believe perpetrated this in Iraq."

Trump had ordered the assassination of Iran’s Maj. Gen. Qassim Suleimani in January after a rocket attack in December killed an American translator in Iraq. Iran retaliated by showering another U.S. base in Iraq with ballistic missiles, but Iraqi authorities later cast doubt on whether Iran was to blame for the December attack.

This time, the source of the attack was much more clear. Esper pointed the finger at Iranian-backed militias for Wednesday’s attack, and the militia Kata’ib Hezbollah released a statement in Arabic on Thursday promising to shield the attackers.

“As we renew our request to the brothers who believe in the necessity of working against the occupying forces . . . we confirm that we will defend them, and we warn against targeting them or any of the forces or individuals opposed to the malicious project of occupation,” the statement said.

Gen. Mark Milley, Chairman of the Joint Chiefs of Staff, had told reporters earlier in the day that he was awaiting "final options and decisions from the President." Esper added that Trump had given him the go-ahead to "do what we need to do."  But the President himself was absent from the messaging around the clashes.

Trump did not address the fighting during his Wednesday night speech to the nation. Instead, he attempted to soothe nerves over the coronavirus pandemic and announced a ban on travel from plague-stricken Europe.

"The virus will not have a chance against us,” Trump said.” No nation is more prepared or more resilient than the United States.”

COVID-19 has hamstrung the U.S. economy as schools and businesses close across the country. Dr. Anthony Fauci, director of the National Institute of Allergy and Infectious Diseases, warned Congress on Wednesday that the nation’s coronavirus testing system is “failing” and the situation is “going to get worse.”

Iran is facing an even more severe outbreak. Officials initially downplayed the severity of the epidemic, but have been forced to admit to the seriousness of the situation as the death toll mounts, virus-afflicted regions threaten civil unrest, and officials themselves fall ill.

Iranian authorities have been massively expanding the country’s cemeteries in preparation for an influx of coronavirus victims since the beginning of the outbreak, and video from a whistleblower suggests that the true death toll is higher than the official statistics, the Washington Post reported. The official death toll stands at 429 as of Thursday afternoon, including seventy-five deaths in the past day.

U.S. economic sanctions had slowed Iran’s efforts to buy coronavirus test kits at the beginning of the outbreak. Eventually, the Trump administration lifted some of the restrictions it had imposed on the Central Bank of Iran. Pompeo then offered Iran direct assistance, which the Iranian foreign ministry stubbornly rejected.

“A claim to ‘help Iran’ by a country that has exerted widespread pressure on the Iranian people with economic terrorism—and even blocked the route to buy medicine and medical devices—is a ridiculous claim and a political-psychological game,” said Iranian foreign ministry spokesman Abbas Mousavi.

“Any nation considering humanitarian assistance to Iran should seek the release of all dual and foreign nationals,” he said in a Wednesday statement. “As COVID19 spreads to Iranian prisons, their detention defies basic human decency.”

But the diplomatic freeze could thaw again as Iran comes to grips with the true danger of the pandemic. Ali Akbar Velayati, a senior advisor to Supreme Leader Ali Khamenei, was diagnosed with COVID-19 on Thursday night, according to state media.

Iranian foreign minister Mohammad Javad Zarif asked the International Monetary Fund for an emergency loan to help cope with the coronavirus crisis, the first-ever request by the Islamic Republic to the Washington-based financial organization.

Zarif followed up his request with a social media post that listed the medical devices that the Iranian healthcare system needs.

“Viruses don’t discriminate,” he wrote. “Nor should humankind.”