Iran Has Exposed Our Weakness: Remote U.S. Bases Have No Missile Defense 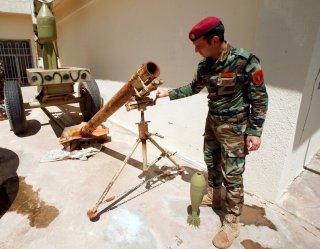 Last week lawmakers pressed Pentagon officials regarding the lack of missile and rocket defenses on Iraqi bases housing American forces. Why wasn't our Army using the Iron Dome system or other capabilities to protect our troops?

Similar concerns had been raised earlier, following Iranian missile attacks on the al-Asad and Irbil air bases, launched in response to the killing of Qasem Soleimani.

The short answer is: our current missile defense systems are not optimized for use on remote bases. Our rocket defenses have progressed no further than what we fielded in Iraq from 2004 to 2010.

Pentagon officials have noted that the U.S. needs Baghdad’s permission to deploy Patriot missiles on Iraqi soil. By itself, that’s an unsatisfying explanation for the absence of Patriots.  Deploying purely defensive assets is rarely controversial. It defies logic that the Iraqi government would have resisted deployment of Patriot assets if the U.S. felt it was necessary. Even if they had, there’s little chance the U.S. would have accepted “no” for an answer.

The failure to deploy Patriots earlier likely arises from a combination of changing norms for the protection of U.S. troops, the overall shortage of U.S. missile defense assets, and operational employment limitations.

The Army has only 15 Patriot battalions: 13 are pure Patriot, and two are a mix of Patriot and Avenger systems. Subordinate to those battalion headquarters are 60 units, referred to as “batteries.”

The batteries are the workhorse of the Patriot system. Typically, they contain six to eight missile launchers, a radar and a control center.  These batteries are spread globally, protecting the U.S. air operations center in Qatar, critical sites in South Korea, and dozens more vital places.

Patriot missile systems are among the most frequently deployed and tightly controlled assets in the U.S. military. Because of their high demand, typically, Patriot units are deployed for one year, then return home for only a year and a half of rest, training and refitting.   A decision to deploy a Patriot system to meet a new requirement usually reduces the unit’s time back at home station.

Because of the small number of Patriot units in the inventory and the relatively low threat prevailing in Iraq in January 2020, deploying a battery to protect 1,500 service members at Al Asad in January 2020, would have been quite unusual. The norm would be to rely on passive defensive measures such as bunkers, shelters and early warning.

Given the American public’s ever-rising expectations for troop protection, military leaders will need to relook those types of assumptions.

But even if the systems had been available for use in Iraq, there are operational employment limitations to be considered.  Patriot systems are ill-suited for use on or near the front line.  Even a relatively small caliber bullet can damage the fragile missile launchers or radar.  Patriots require a secure area, free from the danger of direct fire from weapons such as anti-tank missiles.

Al Asad did not provide that level of protection. Its perimeter fence is, in many cases, within sight of the main airstrip and facilities.  Unless the Iraqis and the U.S. deliberately expand the base or change its security posture, Patriot systems are unlikely to be employed there.

The situation argues for the U.S. to develop a more hardened ballistic missile defense system, but that’s difficult—especially when it comes to radar. Space-based radar might one day solve this problem, but in the meantime, the answer may be either to move all U.S. troops who are within missile range of Iran (i.e., anywhere in the Middle East) to bases able to employ Patriot or to disperse them in smaller concentrations to locations with substantial early warning assets and shelter.

Protecting troops on bases like Taji from rocket fire is a different, even more technically challenging, problem.  Rockets travel on a very low, roof-top level trajectory; their flight time is measured in mere seconds, not minutes. This complicates both detection and interception.

During the height of U.S operations in Iraq, the Army ingeniously cobbled together an elaborate system of Army radars and Navy Phalanx Gatling guns able to shred incoming mortar rounds and rockets with a torrent of 20 mm shells. But that system required a significant number of operators and equipment and, even when fully emplaced, was never 100 percent effective. Nor was it mobile.

This system, called Counter Rocket and Mortar or C-RAM, would be a poor fit for today’s “small footprint” training and counter-terrorism mission in Iraq. Nevertheless, on March 13, the commander of Central Command, Marine Corps General Frank McKenzie, stated both Patriot and C-RAM systems were being considered for deployment in Iraq.

To address this threat in a more coherent manner, the U.S. Army has been working for years to field a deployable system to protect soldiers from a variety of threats, including cruise missiles, unmanned aerial vehicles (UAV), rockets and artillery.   It is a tough problem because each of these threats comes with its own unique trajectory and speed.  As a result, the Army’s Indirect Fire Protection Capability or “IFPC” program has struggled.

Last year, in keeping with the overall shift to great power competition, the Army opted to focus the IFPC program more toward the threat from cruise missiles. It also reoriented its new Stryker-based air defense system, the Maneuver Short-Range Air Defense, to focus on threats such as UAVs.

Unfortunately, other than relying on the cumbersome C-RAM system, this new plan appears to omit protection from rockets, artillery, and mortars.

Last year, perhaps as a way to jump start the program, Congress mandated that the Army buy two batteries of the Israeli Iron Dome system. Even though they haven’t been delivered yet, the Army recently reported that it might be too difficult to integrate Iron Dome into the Army-wide command and control air defense system. The Army's Iron Dome assets may, therefore, remain "orphans.”

Iran boasts the Middle East’s largest and most sophisticated ballistic and cruise missile program.  Rockets, such as the ones that struck Taji, are widely available in the region.  Despite Pentagon efforts to shift forces out of the region in favor of great power competition with China and Russia, Iran’s continuing malign behavior and support for international terrorism will likely require the U.S. to stay engaged, protecting our interests in the region for the foreseeable future.

The unfortunate reality is that, for as long as they are in the area, U.S. forces will have to operate under the constant threat of rocket and missile attack.  Figuring out innovative ways to protect them from missiles and rockets at isolated locations must command a high level of attention.  Hardening Patriot, either dispersing or concentrating troops at protected bases, and modernizing the C-RAM system to make it more operationally employable are potential solutions that should be closely examined.