Iran Would Wage a Hit-and-Run War Against the U.S. Navy 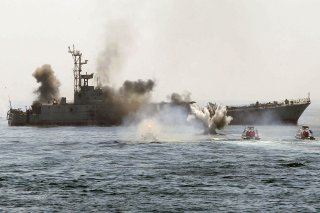 Iran cannot win against a technologically superior force using conventional means. The U.S. Navy is the world’s naval technology leader and is optimized for blue-water operations. In response, Iran is prepared to wage a hit-and-run guerrilla-style war against the Navy.

The Persian Gulf and the Strait of Hormuz have several unique characteristics that Iran plays to its advantage. First is the size of the Strait of Hormuz (SoH), which is relatively narrow at just under 100 miles, which does not provide as much room to maneuver as the open ocean. Additionally, the Persian Gulf is quite shallow, and in some places is too shallow for submarine operations.

Iran has an ace up its sleeve — an award-winning British boat that is perfect for the cramped and shallow Gulf and Straight of Hormuz.

In 2005 a boat design, called the Bradstone Challenger, set a record for sailing around the British Isles. The boat was powered by two 1,000 horsepower engines and was able to achieve a mind-numbingly fast top speed of 72 knots, or 83 miles per hour.

The Bradstone Challenger was sold in 2009 — and hasn’t been seen since then. In 2010, Rear Admiral Ali Fadavi told reporters: “The Bladerunner is a British ship that holds the world speed record. We got a copy we made some changes so it can launch missiles and torpedoes.”

The Bradstone Challenger has a unique monohull design, and would, in theory, be a stable platform for shooting rockets or missiles.

In an interview with Business Insider, Dr. Theodore Karasik talked about Iran’s ability to reverse-engineer and replicate western tech:

“The Iranian defense industry prides itself in acquiring Western technology using false fronts and then cloning its own versions. Why haven’t we seen the Bradstone Challenger yet? It’s quite possible they are holding back some of their more potent capabilities for a surprise purpose.”

One of the most potent weapons in Iran’s arsenal is sea mines. In keeping with Iran’s cost-effective strategy of using cheap weapons to damage high-cost American tech, sea mines are the perfect low-cost solution — simple, plentiful, and cheap.

The mine arsenal at Iran’s disposal is large and varied, a mixture of different mine types, with several countries of origin, including magnetic, acoustic, contact and influence mines. Many are based on Soviet designs. Perhaps the most dangerous of which is a Chinese improvement on an older Soviet mine called the EM52.

The EM52 is a rocket-powered mine that sits on the seafloor. When it detects ships on the surface, the warhead speeds to the surface at over 100 knots (about 115 miles per hour). It is difficult for minesweepers to capture, and can be activated by pressure, acoustic, magnetic or seismic sensors when ships pass overhead.

As the United States learned during and after the Gulf War, mine-clearing operations are slow-going — the perfect tool for tripping up the U.S. Navy.

According to Jane’s, the APKWS “more than 3,000 [APKWS] have been built and 400 have been fired, including more than 200 combat launches. During those engagements, it has demonstrated a hit rate of greater than 95 percent, and some of the misses were deliberately induced with the weapon in flight to avoid collateral damage.”

Cheap, and reliable too.

Iran’s swarming tactics are a convenient solution to fighting a more technologically advanced navy. While these tacts, coupled with extremely fast new speedboat designs are indeed dangerous, the United States too has some capable defenses — speedboats beware.