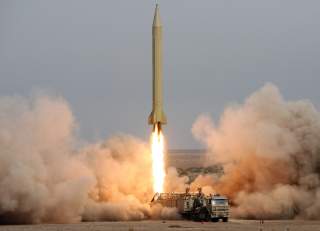 Similarly, the Ghadr missile with ranges beyond 1,000 miles, was derived from the Shahab 3 which has origins in the North Korean Nodong missile which is based on a Soviet Scud. The Qiam missile, which Iran began showing off in the 2010s and is part of the Shahab series, is also based on a Scud.

The main goal for Iran has been to create a sophisticated indigenous missile production industry that combined advances in precision and fuel technology. The goal is to give the spectrum of rockets more capability. Saddam Hussein’s use of Scud missiles in the Gulf War showed the limitations of these missiles. They can harass but they are not a strategic or even tactical threat in the long-run. In addition, shorter-range rockets, like the kind Hamas or Hezbollah have, have been used in large numbers against Israel and their effect has been to engender a multi-layered air defense system in Israel to stop the threat. Hamas fired 2,600 rockets at Israel between March 2018 and December 2019, with little effect. Iran’s use of Fajr and Grad rockets and other rockets to strike at Israel in May 2018, and January, September and November 2019 were unsuccessful.

Up until the ballistic missile attack on January 8, Iran had encouraged its proxies in Iraq to strike at U.S. bases with unguided rockets. These were usually 107mm rockets, the sort Iran has exported across the region, including to Syria.

In 2017 the U.S. Department of Defense showcased Iranian missiles to illustrate the threat Iran poses and the proliferation of its missiles. The U.S. pointed to four systems of short-range ballistic missiles. These included pieces from the Qiam missile that had been exported to Yemen and used against Saudi Arabia. These had reached as far as Riyadh.

The Zolfaghar missile was first used operationally by Iran in 2017 during an attempt to strike at ISIS in Deir Ezzor. The six missiles were fired from Iraq. The use of the missiles was supposed to showcase Iran’s abilities. Firing them over Iraq to Syria to strike at a target 400 or more miles away was intended to show what Iran could do to other adversaries, such as Israel.

The Center for Strategic and International Studies says Iran is a center for missile proliferation and highlights its advances. Its list includes 16 Iranian ballistic and cruise missiles with ranges from 20 miles to more than 1,000 miles. But some of Iran’s ostensibly most impressive missiles, such as the Soumar cruise missile or Khorramshahr appear to boast of longer ranges than have been achieved. Some, such as the Sejjil may need more testing to achieve the 1,500 mile or more range Iran wants from them. The Missile Defense Advocacy Alliance segments Iran’s missiles into categories. For short-range ballistic missiles it highlights the Fateh 110 and Fateh 313, the Shahab 1, Shahab 2, Zolfaghar, Korramshahr, and Qiam. For medium-range missiles it points to the Shahab 3, Sejjil and Emad missiles. In land-attack cruise missiles, it mentions the Soumar and Meshkat. Most studies of the missiles distinguish between those that are road-mobile, which most are, and solid and liquid-fueled missiles. The Shahab series are liquid-fueled and the Fateh series are solid fuel. The Sejjil is a solid-fueled missile.

Iran’s missile threat is well known but it has seen advances over the last decade, particularly in the time leading up to the Iran Deal and after. It appears that Iran, after much media attention on its nuclear weapons program, pushed resources into its ballistic missile program as a threat to its neighbors, Israel and U.S. bases in the region. However, the Missile Defense Advocacy Alliance notes that “Iran’s ability to produce new liquid-propellant missiles is constrained by their ability to develop new liquid-propellant engines.” They have relied on their own technology here rather than buying from others. That may be acceptable for Tehran which has developed an advanced range of missiles.

Iran may have entered the ballistic missile game in order to create a delivery system for nuclear weapons or a strategic threat to the US in the 2000s. A paper at Brookings argues that “Iranians see their missile force as an integral and indispensable part of their national defense strategy, fulfilling key strike roles traditionally taken by manned aircraft, but beyond the capabilities of an Iranian air force.” This impressive arsenal of missiles gives Iran a series of choices when it comes to targeting its foes. But its lack of using the missiles in combat operationally means it doesn’t know how they all perform. It appears that in most cases when Iran did use ballistic missiles some of them fell short. In the attacks on ISIS and the Kurdish dissidents between 2017 and 2018, this was the case. It was also apparently the case on January 8 when Iran fired at U.S. forces. This could be a costly mistake for Iran if these missiles fall on civilians. It also calls into question how accurate Iran can be when it attempts to target a facility. If it fires missiles to destroy infrastructure but not cause casualties, as has been asserted about its attacks on US forces in Iraq in 2019 and Saudi Arabia in September 2018, if a rocket misses its target it could be catastrophic for Iran’s aims.

There is the added question of the proliferation of these technologies. The Houthis appear to have become reasonably proficient in using Iranian missile and drone technology against Saudi Arabia. Iranian missiles have been trafficked to Iraqi-based militias and to Syria and Lebanon. Iran also seeks to transfer add-on technology, such as precision guidance. Do the sophisticated missiles only work with Iranian advisors present, or are local forces being trained to use them? Iran’s use of its missiles appears judicious, targeting strategic infrastructure in Saudi Arabia, or using them to respond to U.S. and Israeli actions. But in its attacks on Israel and the US Iran has failed to fire a large enough barrage to inflict major damage. That is one problem with missiles. If they have to get through air defense they may need to use in large numbers. If they are fired at a target that appears to lack air defense, such as some US bases in Iraq, then the commander of the operation must decide what to target. But these kinds of ballistic missiles have never won a war. Even using precision-guided missiles and smart bombs, as Israel has in over 1,000 strikes against Iranian targets in Syria, or as the US showcased in the Gulf war, the end result is not usually a victory until ground forces are sent in.

Iran’s missiles are an attempt to create strategic depth and a kind of balance of terror and to showcase the regime’s advances. It is a major achievement for a regime under sanctions. It can threaten U.S. and allied forces. But technologies exist to confront the threat, including advances in air defense. Herein Iran’s main threat may be against U.S. allies that do not have air defense or do not want to take the chance of conflict, such as most Gulf states.