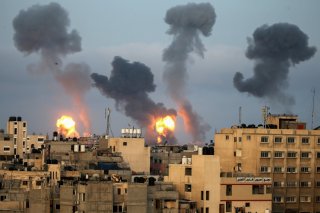 Israel came under barrages of more than two thousand rocket fire from Hamas in Gaza starting on May 10 in an unprecedented escalation that saw masses of rockets target Tel Aviv, Ashkelon, and other cities. The rocket fire came amid political tensions in Israel, a Ramadan holiday that brought chaos in Jerusalem and threats by Iran, Hezbollah, and pro-Iranian groups against Israel. Israel responded with targeted strikes against Hamas leaders, buildings in Gaza, and Hamas anti-tank missile teams.

The volume of rocket fire used against Israel in the first seventy-two hours was larger than in conflicts between Hamas and Israel over the years. Hamas has increased its rocket arsenal over the years, from short-range rockets in the early 2000s to rockets that now reach some two hundred kilometers. BY 2013 some eight thousand rockets had been fired at Israel and Israel had developed the Iron Dome air defense system. In 2019 a total of fifteen hundred rockets were fired at Israel but the conflict that began in May 2021 was very different. Iron Dome is celebrating ten years in combat service for Israel and had downed more than twenty-five hundred rockets when the conflict broke out. Within days it was forced to down hundreds of more threats.

First, Hamas began by targeting Jerusalem with long-range rockets, designed to show it was supporting Palestinian protesters in the Holy City. This has been part of a calculated campaign to not only boost Palestinian protests in Jerusalem, but also cheer on clashes in Israeli cities between Jews and Arabs. That means the rockets have a domestic political element.

On the flip side of the coin, Hamas has also sought to use rockets tactically, appearing to target cities with an overwhelming number of rockets designed to test if Israel’s air defenses could stop them all. Observers pointed out that Hamas also appeared to target areas where it assumed Iron Dome batteries were located.

Hamas also innovated by rolling out a new Ayyash rocket capable of a range of 250 kilometers. That means it can reach all of Israel from Gaza. Iran targeted Eilat on the Red Sea and fired rockets aimed at the far north in Israel. It also fired rockets near the Dimona nuclear facility. In April a Syrian S-200 was fired from near Damascus and set off sirens near the facility in Abu Qrenat, a Beduin community. That happened again on May 14.

Hamas also showed off new kamikaze drones which it called Shehad. The drone is slightly larger than a person and is modeled on the Iranian Ababil and Qasef variant used by Houthis in Yemen against Saudi Arabia. Israel downed one of the drones with an F-15 firing a Python missile into the UAV. It used an Iron Dome interceptor to shoot down another drone. Israel also targeted the Hamas drone launching team on May 12. Israel also said on May 13 that “the IDF fighter jets struck the apartment of Samer Abu-Daka, Head of the Hamas UAV Unit, which was used for military planning and operation of the Hamas terror organization's UAV array.”

In response to the rocket fire Israel called up thousands of reservists and sent elements of the Golani and 7th brigades toward the border with Gaza. By May 14, it had also approved the possibility of a ground incursion, which would be the first since 2014.

Hamas appeared to achieve several successes. Besides being able to send millions of Israelis to bunkers as sirens went off again and again for days, it also was able to temporarily close Israel’s main international airport. Hamas also fired a rocket at an airport near Eilat and sent messages to Israelis not to fly. It also sent an anti-tank team to fire a kornet missile at a jeep on May 12, killing a soldier. Iran has used anti-tank guided missiles along the border in past instances, and Israel has stepped up strikes on the Hamas squads.

The United States has supported Israel’s right to defend itself but has expressed concern about the need to protect civilians in Gaza. On the morning of May 14, Under Secretary of Defense for Policy, Dr. Colin Kahl, met with the Israeli Minister of Defense Director of Policy and Political-Military Affairs, Zohar Palti, at the Pentagon. It followed a high-level meeting between National Security Advisor Jake Sullivan and his Israeli counterpart, Meir Ben-Shabbat, on April 28 where they discussed Iranian drone and precision-guided munition threats.

Israel said in February that its Iron Dome has advanced and upgraded capabilities in the wake of a successful drill. In addition, it has tested it with Israel’s other multi-layered air defense systems last year. Iron Dome has the capability to shoot down numerous threats and its radar helps identify which threats are most relevant and which will land in open areas. Israel’s advanced siren system also warns only those communities affected to enter bunkers. Footage showed instances where rockets struck cities in Israel. In several instances Hamas was able to fire up to 135 rockets in just a few minutes, a major barrage testing Israel's air defenses.

Israel has been upgrading its technology and weapon systems over the last years as it acquires more F-35 jets and fields more advanced drones and artificial intelligence used on the battlefield. By the evening of May 13, as Israel prepared for Shabbat on Friday and as some families were considering canceling their Shavuot holiday plans, reports on the border said there were constant sounds of rockets being fired and Israeli airstrikes. Israel has sought to forego incursions into Gaza in the past, especially during 2018 when an increase in rocket fire led to Israeli defense minister Avigdor Liberman resigning. In 2019, Israel struck Palestinian Islamic Jihad commander Baha Abu al-Ata in another round of fighting. Hamas has ruled Gaza since 2006 and fought wars with Israel in 2009, 2012, and 2014. Now, it is setting the pace in a new round of conflict.