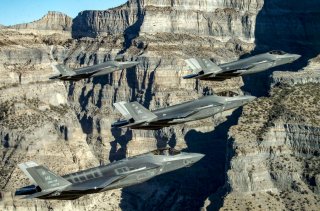 Israel received three more of the advanced F-35 warplane in late April. The planes arrived at the country’s Nevatim Air Base. This means Israel now has twenty-seven of the fifth-generation aircraft, in two squadrons. Israel will take delivery of fifty of the planes by 2024 and will likely acquire more, up to seventy-five.

The plane has been immensely important for Israel, representing a leap forward in its capabilities and Israel has used the aircraft in operations, being the first to use it in combat. This advanced plane is a message to Israel’s enemies, including Iran, of the country’s ability to deal serious blows to any threat. Two questions now impact Israel and its F-35 procurement. How many more planes will it eventually acquire overall, and what will happen with the F-35 sales that are supposed to happen between the United States and the United Arab Emirates.

In the United States, the F-35 deal with the UAE came at the same as the historic Abraham Accords, leading some to see the advanced aircraft sale as linked to the peace deals between the UAE, Israel, and Bahrain. The new Biden administration sought to slow down the procurement. However F-35 sales anyway take many years and Lockheed Martin is busy delivering to almost a dozen other international clients.

U.S. Senators Robert Menendez and Dianne Feinstein have sought to push back against the F-35 sales to the UAE. Nevertheless, it appears the agreement is on track, for now. There were initial questions about whether the sales would erode Israel’s Qualitative Military Edge, but Israel has not sought to oppose the sales. This is likely because the UAE using the aircraft, along with the US which has F-35s at Al-Dhafra base in the UAE, and Israel, could create a kind of F-35 alliance system. It is possible Greece could be part of that one day as well. Israel and Greece have grown rapidly closer in recent years with new defense and energy deals.

At the same time the U.S. Army Corps of Engineers, Europe District said it has delivered an additional secure home for part of the Israeli Air Force’s fleet of F-35 fighter jets. This happened amid a quiet ceremony in Israel for a new Hardened Hangar project that was built on-site earlier this year. It was completed in March, according to reports. It is part. Of the Foreign Military Finance program in which Israel supposed Israel with the construction of strategic facilities.

“This project is a key element of the U.S.-Israeli partnership to deliver a unique set of hardened hangars and operations facilities to house a squadron of F-35’s for the Israeli Air Force,” said U.S. Army Corps of Engineers, Europe District Commander Col. Patrick Dagon. The report goes on to note that “The project was the result of close partnership and coordination from beginning to end, with the Israeli Ministry of Defense providing the designs as well as local quality assurance specialists to complement the U.S. Army Corps of Engineers contract and project management efforts.” This site will enable better security and functionality and well as “interconnectivity with similar facilities the U.S. Army Corps of Engineers is also working on in the country.” Israeli Air Force technicians also installed a secure communications network. More hardened hangers will be built and supported in the future through this program.

According to a report from Lockheed Martin published on May 4, there are not more than 645 F-35s delivered around the world, including to the US. They have flown 385,000 flight hours and have 1,345 pilots. Nine countries operate the advanced plane, including key allies like the UK and Australia as well as Israel, Japan, and Singapore.