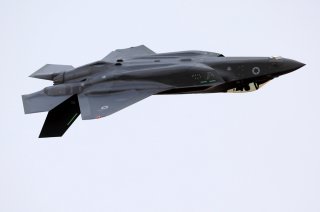 Israel’s Defense Minister Benny Gantz supports the acquisition of a third squadron of F-35s for Israel. Israel opened a second F-35 squadron in January and has two dozen of the advanced fifth-generation warplane. Israel has also conducted three joint trainings with the United States using its F-35 squadron and a U.S. squadron flying out of Al-Udaid in the United Arab Emirates. If Israel acquires more F-35 jets, then it could end up with seventy-five of them, making it one of the central users of the plane.

The comments were reported by Israel’s Yediot newspaper on Jan. 4 and indicate Israel’s Defense Minister is seeking this request. He also may favor buying more F-15 jets, according to reports in Israel. The advanced F-15EX costs slightly more than the F-35 jet and budgetary considerations are important to Israel.

Israel was one of the first countries to acquire the aircraft and also announce that it had used it on missions. In November, Lockheed Martin announced it had delivered more than 585 of the aircraft which now flies from twenty-six bases worldwide. The F-35 jet costs almost $78 million and is used by the UK, Canada, Italy, Netherlands, Denmark, Norway, Australia, Singapore, Poland, Belgium, South Korea and Japan. Israel is the only F-35 jet user in the Middle East. Turkey was supposed to receive the aircraft but a dispute over Ankara’s acquisition of the Russian S-400 system stalled delivery of the aircraft. The UAE now wants F-35 jets and it appears that Abu Dhabi could receive them in the next decade. Israel flies its F-35 jets from Nevatim Airbase in the Negev desert.

Israel envisioned taking delivery of up to seventy-five of the sophisticated warplanes but settled on an initial delivery of fifty of them. It has also reportedly made unique adjustments to the plane to meet its own needs. This makes Israel’s F-35 a special warplane with capabilities that put Israel potentially above other users in terms of operational use. It is a mere formality for Israel to purchase more because of the letter of acceptance signed more than ten years ago. Israel Aerospace Industries also makes the wings for F-35 jets and Elbit Systems makes helmets for the pilots who fly the airplanes. This means Israel is uniquely positioned in regards to the aircraft.

However, Gantz as minister of defense may be leaving soon because Israel is going to elections. His Blue and White party is falling apart and he is losing members of his large parliamentary group every day. This puts him in a bind. He had a good relationship with former Secretary of Defense Mark Esper and they met three times in October. At the time Israel was moving forward with new peace agreements with the UAE and Bahrain and reports indicated Israel wanted to beef up its defense procurement, with perhaps more requests for F-35 jets, KC-46 tanker aircraft, or Osprey helicopters. Israel has even hinted at getting more advanced F-15 jets.

For Israel to move forward a ministerial committee would need to support the decision along with Chief of Staff Aviv Kochavi. Reports in September indicated Kochavi wanted more of the jets. Israel is in the midst of implementing a multiyear plan for its Momentum program, which relies on the F-35 jet as the iron fist of Israel, a technological giant workhorse that combines with other hi-tech innovations Israel has fielded. Israel recently did a multilayered air defense drill which is designed to show the country is ready to face ballistic, cruise missile and drone threats from countries like Iran.

If Israel moves forward, then it could formalize the request soon and send it to Washington. The F-35 jet is estimated to be cheaper now than the new F-15EX jet. How Israel would fund more purchases is unclear. U.S. Foreign Military Funds can support these purchases and reports have indicated Israel could tap into those funds. It wouldn’t need to buy all twenty-five more jets; it could settle on a dozen or so of the aircraft. Either way, this would lead to a third squadron.

Israel is set to receive around seven more of the aircraft over the next several years until its full fifty are delivered by the end of 2024. Any additional aircraft would arrive in 2025 or 2026.