Israel and China are Getting Closer. Should America Be Worried? 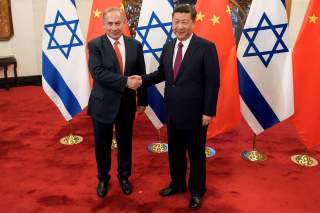 During a visit by Chinese vice president Wang Qishan to Israel last month, Prime Minister Benjamin Netanyahu hailed the “growing ties” between the two countries. Since they established official relations twenty-six years ago, Israel and China have strengthened the bilateral relationship across a number of areas. Israel’s warming to America’s chief competitor sends a clear message to Washington that it can no longer count on unconditional Israeli support.

The United States should be concerned about its closest Middle Eastern ally seeking warmer ties with China. Since Israel’s founding in 1948, Jerusalem has depended heavily on Washington for military sales, economic cooperation, and diplomatic pressure. The United States in return has made Israel an obsequious bedrock of its postwar Middle East strategy, first as a bulwark against Soviet influence and more recently against religious extremism. China’s economic and military rise may over the next few decades push Israel away from Washington and toward Beijing.

Vice President Wang’s visit touted economic cooperation as especially close. Bilateral trade skyrocketed from $50 million in 1992 to $10 billion in 2013, while Chinese investment in Israel totaled $16 billion in 2016. Israel’s vibrant start-up culture is particularly attractive to Beijing, which through its “Made in China 2025” initiative seeks global dominance in its high-tech and advanced manufacturing sectors.

Israel’s geopolitical position is of further interest to Beijing. China could soon make Israel a larger part of its Belt and Road Initiative (BRI), the country’s multitrillion-dollar infrastructure grand-strategy plan. Israel has great potential as an energy supplier and a bridge to markets in Africa, Europe, and the rest of the Middle East. Although the United States is still far and away Israel’s largest trading partner, China will certainly close the gap in the years to come. If Jerusalem moves further into Beijing’s sphere of influence, Washington will lose one of most reliable allies at a time when it needs all the help it can get to contain China.

Although Israeli-Chinese ties have not yet entered the security realm, there is evidence to suggest that they soon may. The U.S. government has expressed concern that Chinese investment in Israel, which so far has touched only non-military sectors, will allow China to eventually develop the high-tech capabilities needed to challenge American military hegemony. A Chinese company has notably secured the rights to operate an expanded seaport in Haifa (Israel’s largest naval base is next door). China, which has already built a port to the south in Ashdod, hopes to increase its influence in the Mediterranean, where the United States has long had a foothold in the form of the Sixth Fleet. Further Chinese development on the Israeli coast will inevitably erode American military power in the region. Although China’s close ties to Iran preclude security cooperation with Israel, it is uncertain how long that dynamic will last.

China has been busy courting nonaligned countries through its ambitions to dominate global affairs. If it succeeds in bringing Israel closer into its orbit, then the United States will have lost a key part of its strategy to contain China in this century.