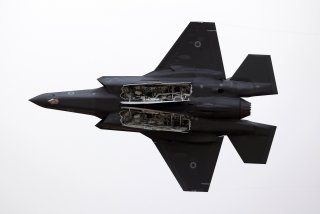 Israel recently hosted the Blue Flag drill. Air forces from eight countries came together in Israel to participate in the joint training. This included the use of Israel’s F-35 fighter jets and warplanes such as F-16 Fighting Falcons, Indian Air Force Mirage jets and French Rafale jets. This represents how Israel, a leader in using the F-35 fighter jets, has become a key place for other militaries to conduct joint drills and learn from Israeli pilots.

An Israeli pilot, who due to security reasons can only be known as “Captain O,” described the important drill. “We are flying with the Blue Flag, the multi-national exercise with other countries,” he said, noting that fourth- and fifth-generation aircraft were flying together. “The F-35s are being flown by Israeli and the Italians.” Israel has practiced with the Italians in the past with F-35 jets in at least two drills, one earlier this year and Blue Flag in 2019. In addition, Israel has used F-35 jets alongside the Americans in Enduring Lightning, a series of drills in 2020.

Captain O said one of the challenges was working with other people from other countries who speak different languages. The commonality is that all the pilots speak English and use it to communicate with one another. Through briefings and planning the pilots and other participants were able to work well together. They practiced different scenarios and flew air suppression and other missions. In some cases, the operations consisted of F-16 Fighting Falcon modeling a strike force and Mirage jets as a defensive counter-air element. “Every day has a different focus point. We train on a variety of aspects,” the Israeli pilot said.

Israel has increased the tempo of joint trainings over the past several years.

“We always had a strong partnership from different air forces from NATO and others,” Captain O said. “This is a huge benefit. We learn a lot from them. It’s not a change for mentality. We always reached out to new partners across the globe.” Blue Flag happens every two years.

Israel is now under U.S. Central Command’s area of operations. In the first days of November, a U.S. Marine Expeditionary force arrived from the 5th Fleet for another joint training near Eilat. The United Aran Emirates’ air force took part in a ceremony for the Blue Flag drill. This comes in the wake of the peace agreement between Israel and the UAE last year.

Captain O, an F-35 pilot, was previously an F-15E pilot. He has been in the fifth-generation aircraft now for a year and is amazed by the transition. “It’s a big privilege to be one of the] first pilots to fly the plane,” he said. The F-35 Eagle fighter jet is a single-seat aircraft unlike the traditional dual-seater F-15 Eagles that Israel has use. That means there is no Weapon Systems Officer or “Wizo,” which means the pilot does more on the aircraft. You can’t split the job into two people, the pilot said. “But the aircraft helps you with it [using] smart avionics, unique systems, so you can perform well as one crew member, it’s fun to be in a single-seat [aircraft], you feel it’s your plane against the world,” the pilot said. F-35 fighter jets are known for being data sponges. Part of the new way of warfare that is netcentric and digital for a battlefield involving more information, more drones and autonomous systems.

Captain O said the F-35 fighter jets perform well and bring new abilities to the battlefield. He noted that during training Israel used its old F-16 Fighting Falcons and F-15 Eagles as a “red force” adversary for training. “The Israeli F-35 also plays red force in some scenarios and that helps the drill be more beneficial and difficult. In each drill there are red players and they are also the force responsible for debriefing, and focus of the day, making all of us as the blue force perform well each and every day,” Captain O said. Both of Israel’s F-35 squadrons participated in the training. These are the 140th and 116th squadrons. The pilot is from the 116th. “I have several years ahead in the squadron and will fly operationally in the 116th. The aircraft is being learned and we are studying it more and more and I have few years to [continue to] fly,” Captain O said.

The new way of hi-tech warfare means receiving a lot more data and information in an airplane, the pilot said. This means more situational awareness. “The pilot has a major role and that won’t change for years to come, it is more data-centric and netcentric and enables us to make better and quicker decisions, pilot has a major role,” Captain O said. That means pilots won’t be replaced by hi-tech drone unmanned aircraft vehicles anytime soon.

A member of the U.S. air force who arrived to take part in the Blue Flag drill also spoke about his experiences. Edgar Montenegro of the Fuels Section Lead came from Germany for the exercise. Along with other airmen of the 52nd LRS POL he was proud to speak about the new VIPER aircraft-refueling kit that the United States is showing off to U.S. allies and partners. The United States says the demonstration opened up discussions about fuel and maintenance issues.

“I’ve had a great time here, it’s interesting working with the nations here whether supporting aircraft or helping,” Montenegro said of the multinational drill based in Germany at Spangdahlem Air Base. The important thing for the Americans and their VIPER kit was the speed of deployment and the new capabilities the fuel system brings to an overseas deployment, he said. “The challenge was getting the equipment, such as trucks and different types of injectors the equipment we needed,” Montenegro said. This can provide a faster turnaround for aircraft. They can launch quickly and don’t need to shut down for refueling.

“This is excellent training for short-notice deployment, it’s semi-real scenario aspect. It introduced some challenges with an additive injector we would face in the real world,” he said. His training and experience have involved working with liquid oxygen and nitrogen gasses, and other key supplies for the aircraft. “My job is often called Petroleum oil and lubricants which is everything to deal with petroleum,” Montenegro said. The VIPER kit has been shown off by the US in other drills, including in Poland. Ideally, it eliminates the need for trucks and reduces preparation time for all the moving parts involved in sending aircraft to another base. “It makes everything compact, quick and less cleanup time,” he said.

The Israeli-hosted drill was the largest in Israel in recent memory and represents the way Israel is increasingly a key partner for the United States, European nations, and countries in the Eastern Mediterranean and as far away as India. The likely increased participation of regional Arab states in the future means Israel’s role with U.S. Central Command will also be more relevant in the future.

Seth J. Frantzman is a Jerusalem-based journalist who holds a Ph.D. from the Hebrew University of Jerusalem. He is the executive director of the Middle East Center for Reporting and Analysis and a writing fellow at the Middle East Forum. He is the author of After ISIS: America, Iran and the Struggle for the Middle East and Drone Wars: Pioneers, Killing Machines, Artificial Intelligence and the Battle for the Future. Follow him on Twitter at @sfrantzman. This article is being republished due to reader interest.