From Israel to India: the Negev Machine Gun Keeps Fighting 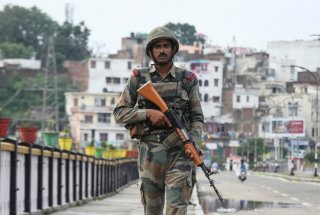 While Israel and India have both made great strides in developing their domestic military arms industries, India continues to be a major purchaser of Israeli small arms. In March 2020, India signed a $118 million contract with Israel Weapon Industries (IWI) to receive over 16,000 Negev NG-7 machine guns. A shipment of 6,000 of the general-purpose machine guns was delivered last year.

The weapons have been deployed to Indian Army units stationed on India’s borders with China and Pakistan.

IsraelDefense reported this week that IWI remains committed to supplying all of the NG-7s to the Indian Army within two years, which suggests that the remaining 10,000 will likely be in service by the middle of 2022. In addition, New Delhi has reportedly expressed interest in another deal to acquire more NG-7s.

The NG-7 is an updated variant of the Negev NG-5, a light machine gun chambered in 5.56x45mm NATO. The NG-7, with its larger and more powerful 7.62x51mm NATO cartridge, has a barrel length of 20 inches. The gas-operated, select-fire machine gun utilizes a short-stroke gas piston operating system and a rotary bolt locking mechanism. The gun is fed from a 100 or 125 round assault drum magazine.

The NG-7 has a normal rate of fire of 600 to 750 rounds per minute (RPM) and offers a second setting for “extreme conditions” that increases the rate of fire to 1,000 RPM. The maximum effective range is about one kilometer. The machine gun’s modernized furniture includes a Picatinny sight rail on top of the receiver and a fully adjustable folding stock.

It is unclear if the NG-7’s supplied to the Indian military are equipped with the IWI eLog weapon-embedded sensor module. The module was added to collect data on the weapon’s use to allow for more efficient maintenance and servicing.

The Negev NG-7 isn't the only imported small arm being employed by the Indian Army. While efforts are underway to produce a domestic version of the Russian-designed AK-203, it was announced in December that the Indian Defence Acquisition Council accorded approval for the procurement of 72,400 Sig 716 G2 Patrol Rifles for approximately $105 million.

At least two hundred soldiers in every Indian infantry battalion will be armed with the Sig 716. The select-fire military assault rifle features a short-stroke pushrod gas system and an advanced operating system that was developed to reduce carbon fouling, excessive heat, and unburned powder in the action. Like the NG-7, the Sig 716 is chambered in 7.62x51mm NATO.

It is likely that the Sig 716s and the Negev NG-7s will be used in the same units to reduce ordnance issues. Both purchases were wise investments to modernize India’s military and aid in its defense.