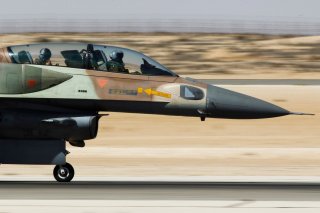 As Israeli defense technology continues to transform the battlefield in Israel and other countries that Israeli sells its weapons to, there are new roles for traditional military personnel. One of the places this has taken place is in the air. For decades two-seater warplanes, such as the F-15E Strike Eagle, have segmented the cockpit workload between one person focusing on flying and one focusing on sensors and guiding weapons to their targets.

The Weapon System Officer, often called “wizzo” in air force terminology, is the person responsible for dealing with the weapons systems. In a conversation with Gideon Weiss, of Israel’s Rafael Defense Systems, he provides an insight into the history of the WSO position within Israel and how Rafael technology has updated that role. Israel has a long history of having Weapon System Officers in its two-seater versions of the F-16 and in its F-15s. For instance, Weiss flew more than 2,500 flight hours in F-15s during his long career in the Israeli Air Force.

Weiss says that today Rafael offers a new package of weapons systems for fighter jets, such as the SPICE 250, a next-generation precision-guided munition with a data-link and stand-off range of 100km. Combining new technology, such as automatic autonomous target recognition and artificial intelligence, is changing the way missiles are used in war. These technologies help missiles identify multiple targets at the same time and use what is called “deep learning” to process data, taking some of the workload off weapons systems officers.

To understand how revolutionary this is, let’s go back a bit into history. In 1982 when Israel’s air force faced off against the Syrians in Lebanon, the key to defeating Syrian air defense was about using intelligence, new drones and Hawkeye Airborne Warning and Control Systems to gain air superiority and then carry out airstrikes. “If you look at that [operation] and you look at how the air-to-surface weapons developed throughout the years, there is a trend in looking at workload in the cockpit and how air crews apply that trend,” says Weiss. Israel has moved through various weapons since, including the GBU-15 and the AGM-142 Popeye, in service since the mid-1980s. “It was up to wizzo, the guy in the back seat and the air crew in the cockpit to fly the aircraft and weapons and what the WSO did with the weapon depended on that. The eyes had to be on target and had to have learned the area and identify, aim and point over the target. One had to be gentle with movements of the hands and get the weapon there with precision,” Weiss notes.

Israel’s Rafael, which was originally founded as the government’s national research and development laboratory focusing on weapons innovation since the 1950s, has developed its SPICE line of air-to-surface missiles guidance systems to convert general-purpose warheads into precision weapons. This adds to its more well-known defensive systems such as Israel’s Iron Dome that intercepts threats like rockets and the Trophy active protection for tanks.

For the WSO, the issue of guiding weapons is important and continues to change. With the AGM-142s Weiss says that guiding the weapon was smoother and less of a challenge than previous weapons. “It was much easier to get to the area and identify the target.” With SPICE Rafael added autonomy so the WSO is more concerned with the big top-level picture of the mission than the minutiae of guiding the munition. That means that while the operator needs to have the right intelligence, the operator does not need to worry as much about the weapon flying to its destination. The WSO becomes “an intel officer, controlling the mission, not the weapon,” says Weiss. “SPICE 250 is a netcentric enabled weapon… [which] enables the WSO in the back seat to monitor the weapon and look at things the weapon sees in real-time,” he says.

This is a revolution from a busy cockpit workload and a hard-working “wizzo” to a more intelligent kind of war where the operator has more time to focus on larger questions and more targets of opportunity. It improves situational awareness the former pilot says. What this means for war is clear on the battlefields Israel has been fighting and for countries that Israel has been selling precision ordnance to. For instance, Israel’s way of war has become much more precise over the years, reducing civilian casualties and providing the air force and other units with a plethora of options and intelligence in real-time that was not as available in the past. In addition, the use of artificial intelligence and more autonomous systems, such as more drones and three-dimensional mapping and other electro-optical capabilities, is giving pilots and commanders a much better picture of the battlefield.

Israel has been doing a lot of this kind of training over the last years. For instance, as part of Israel’s Momentum plan, there is more focus on what are called “multi-dimensional” units, which means combining air force assets and ground units to land a knock-out punch in time of war. New training with virtual battlefield simulators the Israeli Defense Forces is using, such as Elbit Systems’ new Brigade and Battlegroup Mission Training Center, is supposed to up the qualities of Israel’s various brigades prior to the next clash with Iranian-backed Hezbollah in Lebanon.

For weapon systems officers, the obvious question is how much longer do planes need to have two people in the cockpit, especially in a world with more drones and F-35s that are data-sponges with masses of sensors capable of doing more than previous generation jets. Even the U.S. Marine Corps have reportedly been reducing the role of WSOs in their F/A-18Ds.

Weiss agrees that if we look at the United States and the air force complement of F-15 and F-16s we likely see more single-seaters, even though the F-15E was made as a dual-seater. Israel preferred its F-16s to be dual-seaters by contrast. “The reason for the [Israel] Air Force doing that, and the reason [the IAF says why they built it the way they did, on so many dual seaters], is that we are a small arena and we take off into a battlefield.” That means a pilot may be taking off and already find themselves close to an adversary, whether in Lebanon or Gaza. “You may need to immediately have switches and mindset in combat mode, you don’t have a transit or a lot of time, you are right there, so the survivability and the ability to have one person one the mission and eyes looking outside [and maintaining] survivability of aircraft while another does mission execution is why we keep the dual seater even when we have advanced weapons,” says Weiss.

Israel’s Rafael put other systems on aircraft to improve their abilities and change the workload for the WSO. It developed Reccelite, a pod that is used for surveillance and can scan a wide area in different spectral bands, collecting images. They also put Litening target identification pods, now in their fifth generation, on warplanes, which help with identification and threat tracking. The pod has forward-looking infrared and laser markers. Litening is used by twenty-seven air forces and is on twenty-five types of aircraft, Rafael says.

The next step for many air forces is to combine these kinds of technologies over the coming decades. This means more autonomy, artificial intelligence and machine learning capabilities incorporated into weapon systems and target identification. “The fact is that we have just started fielding these new weapons and there a lot of room for these weapons to grow and demonstrate new capabilities as they are used in combat and are tested more thoroughly, and with new requirements,” says Weiss.

Air forces around the world are struggling with which systems to acquire amid budgetary challenges and the coronavirus pandemic. While some are acquiring F-35s, there are many that want to maintain warplanes they already have, like F-15s and increase their capabilities by basically incorporating better add-ons such as better missiles and intelligence pods. In addition, many countries, including the United States, continue to procure new F-15s. In terms of armaments and the role of weapons systems officers changing with the capabilities of weapons to process information faster and provide a better picture for the operator, the future will present many opportunities for new stand-off capabilities and precision. Israel, as it has been for decades, will continue to be at the forefront of that future and also be able to have proven the effectiveness of their weapons on the battlefields that it faces.