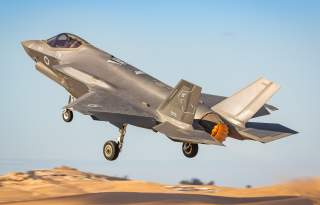 The first public photograph has appeared depicting an F-35 stealth fighter in the livery of Israel’s second squadron of the radar-evading jets.

The Israeli air arm in late December 2019 released a photo of an F-35 wearing the tail markings of 116 Squadron.

The aircraft, which rolled off the Lockheed Martin production line in Texas in 2015, arrived in Israel in December 2019. It originally appeared in the markings of 140 Squadron, the Israeli air force’s first F-35 unit. The air force soon repainted the F-35 in 116 Squadron colors.

116 Squadron and 140 Squadron both fly from Nevatim air base in southern Israel. The units formerly flew F-16A/Bs.

The photo of the 116 Squadron F-35 signals the steady expansion of the Israeli stealth-fighter force. Tel Aviv has ordered 50 F-35Is, which are versions of the conventional-takeoff F-35A with some unique, Israeli-made electronics. The air force by late 2019 had received 14 F-35s. The remaining 36 fighters are due to arrive no later than 2024.

The Israeli air force claimed it was the first to fly F-35s in combat. Tel Aviv in May 2018 announced it had deployed the radar-evading jet on two fronts. The Israeli government circulated a photo of an Israeli F-35A flying over Beirut during the daytime, strongly implying the fighter struck targets in Lebanon. Israeli warplanes also frequently operate over Syria.

Having stood up two F-35 squadrons, the Israeli air force now must decide whether to form a third. The 50 airframes on order are sufficient to equip just two squadrons.

The government is weighing whether to buy 25 additional F-35s or acquire new F-15s from Boeing, instead. “Israel must make this decision under extraordinary external and internal pressure,” Breaking Defense noted. “From without, it must conduct airstrikes on Iranian-linked targets in Syria amidst rising tensions with Iran.”

“From within, it must find funding despite a growing budget deficit and an embattled Netanyahu government,” an Israeli senior source told Breaking Defense. Israeli prime minister Benjamin Netanyahu is under indictment for corruption and through two recent elections has struggled alongside rival Benny Gantz to form a majority government. A third election is scheduled for March 2020.

The Israeli air force reportedly wants to buy a squadron of new F-35s and a squadron’s worth of F-15IAs based on the latest F-15EX design that the U.S. Air Force is acquiring from Boeing. “Officials believe that a force mix of F-35I ... along with a squadron of F-15IA would allow Israel to carry out a number of complex operations, including any possible confrontation with Iran on its borders,” Jerusalem Post explained.

But buying both types instead of just one could set back the Israeli government a whopping $6 billion. “Given the tight budget, the IAF has to choose which fighter to buy first and which to delay for several years,” Breaking Defense stated.

It’s worth noting that the United States subsidizes Israel’s weapons-purchases at a cost of billions of dollars annually. The Israeli air arm already operates 25 F-15I fighters. Around 50 F-15C/Ds and 200 F-16s round out the Israeli fighter force.

The fighter Israel chooses for its next purchase could reveal its priorities. “The stealthy F-35 is better able to slip through advanced air-defenses like the Russian-made S-300s now in Syria, but the F-15EX can carry heavier bomb loads: 29,500 pounds for the F-15EX versus 22,000 for the F-35 in a ‘beast mode’ that gives up stealth,” Breaking Defense explained.

“The F-35 has uniquely advanced electronics that enable to scout ahead and spot targets for other aircraft — such as F-15s — but the F-15EX is more easily modified with Israeli equipment,” the trade publication continued.

The F-15EX also is big enough to carry Israel’s new Rampage air-launched ballistic missile. The F-35 probably can’t carry the powerful but bulky ALBM. “While the F-35I has advantages such as intelligence gathering, the F-15IA’s assets closely match most missions carried out by the IAF, such as dealing with enemy missile launch sites or terror targets on its northern or southern borders,” Jerusalem Post reported.