Italy Is Using Its F-35s to Patrol Against Russia 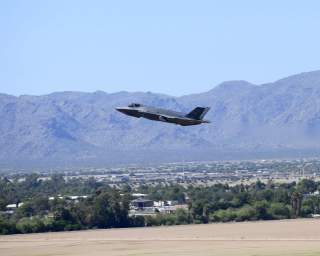 Key point: The F-35s on patrol will get to test their capabilities against Russian fighters trying to harass NATO airspace.

Italian F-35As belonging to the Italian air force’s 13° Gruppo, 32° Stormo are on track to take over the air-policing mission in Iceland, David Cenciotti reported at The Aviationist on Sept. 25, 2019.

“The Italian aircraft, that have already deployed to Keflavik International Airport, from their homebase at Amendola air base in southeastern Italy, will start flying familiarisation sorties in the next few days,” Cenciotti wrote. “After achieving the NATO certification they will start quick-reaction alert duties.”

“The F-35s, were accompanied by a KC-767A tanker, a C-130J and a P-72A maritime patrol aircraft,” Cenciotti added, citing data from flight-tracking websites.

F-35s surely will become regular fixtures in NATO deployments. Several NATO countries besides Italy are acquiring F-35s, including the United States, the United Kingdom, The Netherlands, Belgium, Denmark and Norway. Spain has expressed interest in the stealth fighter. Canada seems likely to acquire the type.

The deployments are significant because they put NATO fighters in close contact with Russian warplanes flying along Russia’s western frontier and in North Atlantic air space. It probably won’t be long before NATO F-35s intercept Russian Sukhois.

The F-35 recently has passed several important milestones despite lingering cost, technical and maintenance problems. The Royal Air Force’s F-35Bs flew in combat for the first time on June 16, 2019.

The F-35s didn’t drop bombs or fire missiles or guns during their combat patrol. Still, the mission made the United Kingdom the third country after Israel and the United States to deploy F-35s in wartime.

So far, the U.K. F-35B’s sortie rate in wartime conditions is no better than the sortie rate the remnant fleet of 1980s-vintage Tornadoes achieved in the years preceding their retirement. The eight Royal Air Force Tornadoes at Akrotiri as recently as 2015 managed two, two-ship sorties a day, each lasting six to eight hours, according to Financial Times.