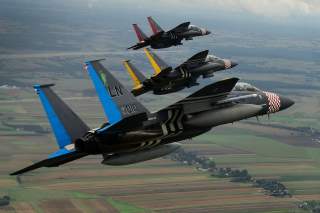 The U.S. Air Force on Sept. 12, 2019 practiced refueling and rearming F-15E fighter-bombers at an austere location. The exercise, centered around the Royal Air Force base at Lakenheath, is part of a service-wide effort to make warplanes less vulnerable to attack.

An MC-130J transport apparently hauled equipment and ground crews. The transport met two F-15Es on the ground. Crews presumably pumped fuel from the MC-130’s tanks into the F-15s.

“The idea is to resupply an aircraft with ammunition, get it back airborne and in the fight,” Senior Master Sgt. Jason Smith from the 48th Munitions Squadron, part of the Lakenheath-based 48th Wing, told an Air Force reporter.

The Air Force in recent years has practiced forward-area refueling point, or FARP, operations with F-15Cs, F-22s, F-35s and CV-22s.

During wartime, transports such as the MC-130J could spread out across Europe or Asia, transforming remote airstrips into bases for small contingents of combat aircraft.

In separate but related efforts, the flying branch has worked out concepts for pairing small groups of fighters with heavy transport planes such as C-17s in order to create easily-distributed packages of self-supporting air power.

Dispersed units are less vulnerable to attack than are units that concentrate at a small number of large bases.

The Air Force’s Pacific units arguably are the most concentrated and could benefit the most from dispersal. On April 22, 2019 Pacific Air Forces practiced spreading out its warplanes across the region in order to make it harder for Chinese forces to target them.

Preparing for bad weather was the main official justification. But the April 2019 “dispersal exercise,” centered on Andersen Air Force Base on Guam, also was part of an evolving Pentagon plan for waging high-tech war against China.

A wide range of aircraft participated in the exercise, including F-16s from Misawa air base in Japan, F-15Cs from Kadena, C-130Js from Japan’s Yokota air base and C-17s and F-22s from Pearl Harbor in Hawaii. The aircraft quickly spread out across Micronesia.

The 3rd Wing gave the idea its "Rapid Raptor" name and briefed the concept to the Air Force’s then-chief of staff Gen. Mark Welsh. The aim was for the 3rd Wing, during wartime, to quickly disperse its F-22s across many bases instead of concentrating them at just one facility where they might be vulnerable to, say, a Chinese ballistic-missile barrage.

The concept caught on. In July 2017, Air Force commandos in the United Kingdom practiced deploying to an austere airfield to quickly refuel and rearm F-15s from the 48th Wing. It was the first time that Air Force special operators and their MC-130 transports had teamed up with F-15C fighters at a FARP.