Israel Wants to Kill Rockets and Drones with Lasers 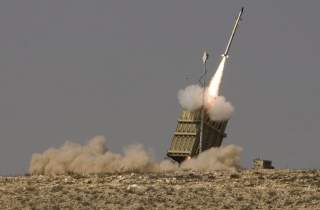 Israel has been working on using lasers to confront rocket and drone threats. Israel’s Directorate of Defense Research and Development announced a new breakthrough in the use of lasers earlier this month. “We are entering a new age of energy warfare in the air, land and sea,” Brig. Gen. Yaniv Rotem, the head of the Directorate said.

Israel already has a multi-layered air defense system consisting of Iron Dome, David’ Sling and Arrow 3, designed to stop threats from low-level mortars to ballistic missiles. All of these systems have been used in the last several years with Iron Dome being the workhorse of Israel’s air defenders. In the last two years, Israel was pounded by more than 2,600 rockets from Gaza and Iron Dome has either intercepted most of them or used its complex radar and algorithms to determine where they will fall harmlessly.

However, Israel knows that the next conflicts it faces in the north against pro-Iranian groups like Hezbollah, will involve more complex threats. With U.S.-Iran tensions growing in the wake of the killing of Qasem Soleimani Israel has announced not only new advanced tests of Iron Dome on January 12 but also its laser breakthrough on January 8. The research and development investments at the Ministry of Defense and with Israel’s defense companies now place Israel among the “leading countries in the field of high-energy laser systems. Throughout the year 2020 we will conduct a demo of our capabilities,” the Ministry says.

Israel wants to create several platforms for these laser weapons that it believes will be a  strategic game-changer. This will mean the development of a ground-based laser system to complement Iron Dome’s existing capabilities. After the attack on Saudi Arabia’s Abqaiq in September by drones and cruise missiles likely launched from Iran, the combined threat of drones and cruises missiles is one that must be met by countries in the Middle East.

In addition to the ground-based system, Israel wants a maneuver platform. This is something the U.S. has already looked a for its IM-SHORAD concept of a maneuverable short-range air defense system. It will defend troops in the field, for instance during offensive operations. A third system Israel wants is one “mounted on an air platform to intercept threats above cloud covers and  for the defense of wide areas.”

What are the advantages of laser weapons? They are low-cost in comparison to missiles. They can be combined with systems like Iron Dome giving the operator more possibilities to intercept a target and more choices. That can make the overall system more efficient and enable it to use less interceptors, such as missiles. In a battlespace that now may involved rockets, mortars, missiles, anti-tank guided missiles, different types of drones swarming and cruise missiles, the laser gives the potential to intercept the array of threats.

A dozen attacks on U.S. forces in Iraq by short-range missiles and the Iranian cruise missile attack show how important air defense is becoming. Without it, bases are just large targets waiting to be struck. Israel says that over the years it has invested considerable efforts in advancing its powerful laser technology. It has collaborated with two of its largest defense companies, Rafael and Elbit Systems, as well as academic institutions. The breakthrough now involves the increasing precision of the laser beam. “Using the new technology, the defense establishment has succeeded in precisely focusing the beam on long-range targets, including overcoming atmospheric disturbance,” Israel says.