Israeli’s Namer: The Best Armored Personnel Carrier on the Battlefield? 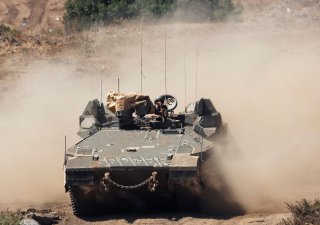 The Namer platform began life as the Merkava I tank. These indigenously-designed Israeli tanks were an excellent choice for conversion into armored personnel carriers, as their rather modest 105 millimeter main gun could not easily be upgraded to a larger gun without extensive and expensive modification, though nothing was actually wrong with the tanks themselves.

The Namer armored personnel carrier is possibly the most heavily armored APC in the world. This engineering success was partly made possible by reinvesting the weight saved by removing the Merkava turret and gun into further armor protection in addition to the standard Merkava I armor.

In addition to the Namer’s turtle-like roof, the APC also has armor side skirts which protect the top of the APC’s treads and a V-shaped hull for underbelly protection from improvised explosive devices—both of which are crucial requirements for urban operations of the type that Israeli has faced in the past.

In addition to the classified composite armor mix and steeply-sloped hull glacis, the Namer is also equipped with the Israeli Trophy active protection system. The formidable Trophy uses hull- or turret-mounted radar to detect incoming projectiles and shoots them out of the air with a shotgun-like projectile blast before it can hit its target.

One account, elaborated on in a RAND Corporation publication, outlined the Trophy system during Israel’s 2014 Operation Protective Edge:

“Indeed, according to some accounts, there were at least 15 instances of active protection systems intercepting Kornet-style missiles. Anecdotally, some IDF patrols reported that they did not even realize that active protection systems had intercepted an incoming round until they returned to their assembly areas and realized the outsides of vehicles were black from Trophy intercepts.”

Taken as a whole, the Namer is an incredibly tough nut to crack.

One variant of the Namer was even converted into an infantry fighting vehicle by mating a turret with a thirty-millimeter gun to the hull. A neat video of the Namer IFV was released by the Israeli Ministry of Defense showcasing the platform’s firepower. Despite the Namer’s prodigious sixty-ton curb weight, it is still very mobile and boasts a respectable 1,200 horsepower diesel engine.

The Namer platform proved itself during the 2014 Operation Protective Edge. While the Namer is certainly capable, it is heavy, and may be unsuitable in some circumstances. Still, Israel has a winner with one of, if not the most protected, armored personnel carriers in the world.