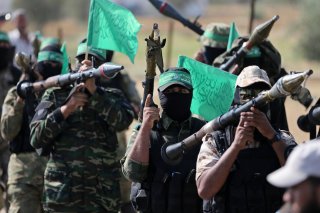 Here's What You Need To Remember: The hard part is hitting these targets. But a concentrated beam of light hits its target practically instantaneously, and a laser won’t run out of ammunition as long as it has enough electrical power.

Israel is turning to a high-tech weapon to stop a low-tech threat.

Kites, balloons and even inflated condoms, launched across the Gaza border into southern Israel by Hamas and other Palestinian groups, have become a major problem for the Israeli military. Cheap to make and simple to launch, and fitted with incendiary devices, explosives or even flaming rags, they have set thousands of acres of Israeli farmland and parkland ablaze. Yet Israel’s sophisticated Iron Dome missile defense system is helpless: its 10-foot-long interceptor-missiles are designed to shoot down battlefield rockets and artillery shells, not kites.

“The laser is capable of engaging targets day or night with an effective range of two kilometers (1.6 miles),” according to the Times of Israel. “It can be moved around on a small trailer or installed on a truck.”

“The portable system which can be installed on a moving vehicle can be operated both during the day and at night.” The system, which reportedly costs around a million dollars apiece, was developed by commercial companies, Ben Gurion University, the Israel Police and the Israel Defense Forces.

Kobi Shabtai, chief of Israel’s Border Police, told the Channel 12 network that Light Blade “provides a near-conclusive response to everything relating to balloons and kites, and delivers a safe and effective solution to the drone threat.” While the threats may seem toy-like, they have the potential to be deadly, especially in a dry and often drought-stricken country like Israel. Since March 2018, when Palestinian protests began along the Israel-Gaza border, “the devices have caused over 2,000 separate fires resulting in over 35,000 dunams (approximately 8,500 acres) being burnt,” says the Jerusalem Post. “According to the IDF, this has included over 13,000 dunams (approximately 3,200 acres) of nature reserves, and over 11,000 dunams (approximately 2,700 acres) of forestry.”

Light Blade is still in the test stage, but there are some details that aren’t clear. For example, how powerful a laser does the system use? Several nations are already developing high-energy laser, or HEL, weapons for anti-missile and anti-drone defense: the U.S. Army plans to field a battery of Stryker armored vehicles, armed with 50-kilowatt lasers, by 2023. The ranges of such weapons are classified, but Boeing’s Compact Laser Weapon System (CLaWS), which comes with power of 2 to 10 kilowatts, has hit test targets at a range of two kilometers.

On the other hand, kites, balloons and condoms carrying incendiary materials wouldn’t be the most difficult challenge. Depending on how powerful the laser is, the beam needs to stay focused on the target for a certain period of time. A fabric kite would seem fairly easy to set alight, while an explosive-armed recreational quadcopter can be disabled.

The hard part is hitting these targets. But a concentrated beam of light hits its target practically instantaneously, and a laser won’t run out of ammunition as long as it has enough electrical power.