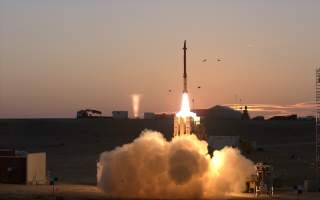 David's Sling must have been shooting blanks.

Israel's new anti-missile interceptor, sort of a longer-range version of the vaunted Iron Dome, has missed its target during its first combat engagements.

On July 23, two David's Sling interceptors were launched against Russian-made SS-21 Scarab tactical ballistic missiles, fired by the Syrian government at rebel targets. Israeli air defense mistakenly concluded the missiles were on a trajectory that would hit northern Israel, so interceptor rockets were launched but missed. The Scarabs landed less than a mile from the Israeli-Syrian border.

Adding to the embarrassment, air raid sirens sent Israeli civilians to shelters: 25 seconds after the first interceptor was launched, the Israeli military ordered it to self-destruct, triggering fears that shrapnel would rain down on civilians, according to Israeli news site Ynet. And, one David's Sling apparently landed in Syria, less than a mile from the border. There have been no reliable reports on whether the Syrians or Israelis recovered the rocket, though it is reasonable to assume that Israeli special operations forces would have scrambled to grab the debris first.

However, a report -- or perhaps more of a rumor -- in Israeli publication Debka says that Russia and Syria have already recovered it because the Israeli military acted too slowly, and was afraid of provoking a clash with Russian and Syrian troops (though this hasn't stopped Israel from bombing numerous targets in Syria).

It was an ironic debut for a weapon dubbed the "Magic Wand." David's Sling is a joint project between Israeli defense contractor Rafael and America's Raytheon. It is a medium-range missile defense system designed to be middle tier of an integrated network that includes the short-range Iron Dome and the long-range Arrow.

The interceptor for David’s Sling is the Stunner two-stage missile with a hit-to-kill warhead," says the Missile Threat database maintained by the Center for Strategic and International Studies. It travels at Mach 7.5, reaches an altitude of 15 kilometers (9 miles), and has a range of 40 to 300 kilometers (25 to 186 miles). Stunner has a front section that has been likened to a dolphin’s nose that allows room for both the interceptor’s radar and infrared homing seeker. Stunner contains a three-pulse motor. The first two accelerate the missile through its initial trajectory while the third activates to maneuver the interceptor and increase speed prior to intercept. Each missile costs around $1 million."

David's Sling was declared operational in 2017, but the 2018 incident marks the first time it had been fired in anger. The abortive interception follows the downing earlier this month of a Syrian Su-22 jet by Israeli Patriot anti-aircraft missiles. But with the Syrian Civil War ebbing as the Assad regime recaptures much rebel-held territory -- including the Golan Heights -- there may be fewer Syrian ballistic missile launches to draw Israeli interceptors.

The fact that David's Sling flubbed its combat debut shouldn't be an indictment of the system.  Many weapons fail their first trial by fire, and missile defense systems are among the most complicated arms in history.

Nonetheless, an effective missile defense shield is Israel's deterrent against Iran, as well as the flagship achievement of Israel's high-tech arms industry, whose Iron Dome has almost become a cultural icon. But if Israel couldn't successfully intercept a single Cold War-era ballistic missile, then what would happen if Iran or Hezbollah fired massed volleys of missiles? A failed intercept can't be good news for Israeli missile defense.

And with Israel serving as the proving ground for U.S. missile defense, it can't be good news either for the enormously expensive American missile defense program.