It Looks Like China Is Testing 2 Kinds of Hypersonic Missiles 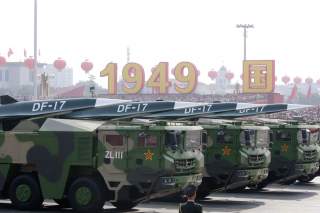 Key point: Hypersonic missiles travel faster than regular missiles and so are even harder to shoot down.

David Axe serves as Defense Editor of the National Interest. He is the author of the graphic novels  War Fix, War Is Boring and Machete Squad. This first appeared earlier in December 2019.