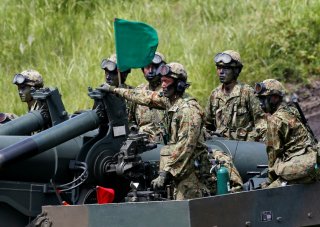 Eighty years ago, the Empire of Japan had one of the world's most powerful navies, and its armies began a massive campaign against much of Southeast Asia and the Western Pacific. Its territory stretched across much of China, and its military seemed to be unstoppable – yet less than four years later, its cities were destroyed, and its army and navy vanquished. Today, Japan is a major ally of the United States and could be a crucial partner in a war against the People's Republic of China.

The humbly named Japan Self-Defense Forces (JSDF) were established in 1954. Yet, owing to the Japanese constitution, which forever renounced war as an instrument for settling international disputes, the JSDF was intended for defensive purposes only. It grew out of the 75,000-member lightly armed National Police Reserve created just after the Korean War began in 1950.

The "Military" By Another Name

Even as Japan has focused on defensive capabilities—and that includes carefully avoiding the word "military" for its armed forces—the nation's government has seen the dangers posed by potential, adversaries including China, North Korea, and Russia. As such, officials in Tokyo have begun to push citizens to put aside the widespread unease over a more "robust" role for the Japanese military while also trying to gain support for increases in defense spending.

The Associated Press reported that currently, Tokyo directs tens of billions of dollars annually towards Japan's ever-growing arsenal that now consists of nearly 1,000 warplanes, dozens of destroyers, and even submarines. The "military" may be named "Japan Self-Defense Forces," but those forces rival the size and capabilities of Great Britain and France. It is ranked fifth globally in overall military size, after the United States, Russia, China, and India, while its defense budget currently ranks sixth among 140 countries by the Global Firepower rating site.

It also shows no sign of slowing down, as Japan continues to invest in the best equipment and small arms available. Critics warn that Tokyo should learn from its past and pull back from such bold military expansion. Still, proponents of Japan's military might say that it is necessary and even high-time to an alliance with Washington and regional partners.

Identifying those threats, Japan has built up an arsenal that includes more than 900 warplanes while its navy consists of 48 destroyers, including eight armed with Aegis missile-combat systems and 20 submarines. Japan is also one of the U.S. partners to go all-in on the advanced Lockheed Martin F-35 Lightning II stealth fighter, of which 42 will be the F-35B variant. In addition to being the largest user of the fifth-generation stealth aircraft, the deployment on its Izumo-class multi-purpose destroyers could allow Japan to operate de facto aircraft carriers for the first time since World War II.

A strong Japan—one that is bound by a constitution that calls for a defensive use of its "military" – could be just what the United States and its partners need to help stand up to China in the Western Pacific.