Why the U.S. and Japan Are Ramping Up Their Military Ties 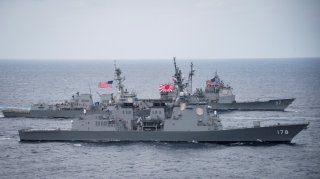 The  U.S. Navy detailed the activities of a Surface Action Group formed between a Japanese Murasame-class destroyer and a U.S. Navy Independence-class Littoral Combat Ship.

The pair of ships practiced a variety of “surface warfare tactics to include flight operations, communications drills and coordinated tactical maneuvering, all designed to enhance interoperability and enabling the ships to practice bilateral tactics in close proximity to one another.”

“Meeting our JMSDF (Japan Maritime Self-Defense Force) allies in the South China Sea allowed both of our teams to build readiness as we sail in the Indo-Pacific,” explained Cmdr. Michael Root, commanding officer of the USS Jackson’s Gold Crew. “The complex maneuvering and operations we accomplished without meeting face-to-face reflects the strong friendship and maritime professionalism that our nations and navies share.”

The joint U.S.-Japanese cooperation comes on the heels of significant Chinese and Russian activity in the western Pacific. Chinese and Russian warships conducted their first-ever joint patrol that included tactical maneuvers and other military drills from October 17 to October 23.

Although closer military integration between Russia and China is worrisome for the United States, the recent exercises were particularly concerning for Japan. During the exercise, the Sino-Russian flotilla passed through the Tsugaru Strait, a body of water separating Japan’s northern Hokkaido island from the Honshu mainland and connecting the Sea of Japan with the Pacific Ocean.

During a press conference, China’s Foreign Ministry Spokesperson Zhao Lijian emphatically stated that “China and Russia are united like a mountain, and our friendship is unbreakable. Under the strategic guidance of President Xi Jinping and President Putin, bilateral relations have withstood the test of the changing international landscape, setting an example of a new type of major-country relationship.”

The United States Marine Corps has recently paired with the Japanese Navy when a pair of USMC F-35Bs conducted operations off one of Japan’s Izumo-class helicopter destroyers, validating their new decks, modified to support F-35B operations. Though dubbed helicopter destroyers, the Izumo-class ships are, in effect, light aircraft carriers, able to host the forty-two F-35Bs Japan has on order from the United States.

Although the Japan Self-Defense Forces are constitutionally constrained to be a defensive force only, increasing tension in Japan’s near-abroad has prompted increased Japanese military investment and an increased power projection capability.

Not only is Japan putting serious investment in its naval capabilities, with an emphasis on interoperability with the U.S. Navy and Marine Corps, but the country is also taking defense more seriously than perhaps any time since World War II.