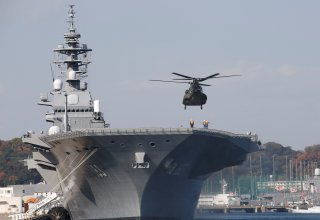 A pair of F-35B Lightning II Joint Strike Fighter jets recently launched from the Izumo, Japan’s largest warship. The recent exercise was significant for two important reasons. First, it was the first time that fixed-wing aircraft have launched from a Japanese warship since World War II, but the Izumo’s airplanes were not Japanese—they were American.

The U.S. Marine Corps pilots flew the two F-35B jets on to and off the Izumo, validating modifications done to the ship to support short take-off and vertical landing (STOVL) aircraft operations. Video of the test can be seen here and is worth the watch.

Though nominally categorized as a helicopter destroyer, the Izumo is, in essence, a small aircraft carrier. And while the ship cannot accommodate the kind of aircraft that require long runways for takeoff and landing, it can operate in tandem with helicopters and STOVL aircraft.

A Japan Maritime Self-Defense Force (JMSDF) Twitter post on the event explains that “the JMSDF continues to steadily carry out the necessary modifications to the IZUMO class to acquire the capability to operate the F-35Bs.”

Just two hulls represent the Izumi-class, the lead ship, Izumo, and the Kaga. The class’s recent modification to accommodate ships other than helicopters has led to some consternation both domestically in Japan and abroad. Japan’s constitution explicitly forbids the Japanese military—or Japan Self-Defense Forces—to possess offensive capabilities. Hosting fixed-wing aircraft has been interpreted as a departure from the JSDF’s constitutional self-defense constraint.

The Japan Self-Defense Forces are slated to receive forty-two F-35B jets from the United States in 2023 and operate off of the Kaga and Izumi. And while the Japanese Ministry of Defense has sought to downplay the significance of F-35B operations from its two helicopter destroyers, doing so would be a significant departure from previous Japanese capabilities at sea.

Further complicating the issue is the Kaga, named after an infamous World War II Japanese aircraft carrier involved in the attack on Pearl Harbor and other actions against the United States in the Pacific Ocean, including the Battle of Midway.

Launching Japanese-flow J-35s from the JMSDF’s two Izumo-class carriers would is a radical departure from the country’s overly pacifist political and military stance and is a testament to how seriously the island nation takes the threat from China.