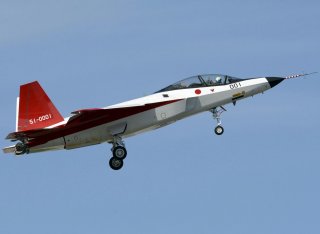 Earlier this week, the Japanese Ministry of Defense unveiled plans to start production of the still-prototype airframe in 2031.

Although the prime contractor for Japan’s stealth fighter program, tentatively called the F-X or F-3, has yet to be selected, the program is already well underway. A flight demonstrator called X-2 Shinshin first flew in 2016 after extensive flight testing with a radio-controlled scale model. The X-2 airframe, built by Japan’s Mitsubishi Heavy Industries, is intended to provide Japan with insights into stealth technology—a first for the island nation.

Japan is the number one importer of the United States’ latest stealth fighter, the F-35. Despite the over 150 F-35s Japan is slated to receive, the current Japanese stealth effort was prompted in part by being rebuffed from purchasing the older, stealthier F-22 Raptor thanks to America’s strict Obey Amendment. The amendment places a complete export ban on the F-22 Raptor due to concerns that some of the secret stealth technology that went into the airframe could be clandestinely gleaned by enemies of the United States.

The F-X/F-3 is slated to replace most, if not all, of Japan’s F-2 fleet. Though certainly a capable fighter, the F-2—a derivative of the American F-16 Fighting Falcon—first entered service with Japan in 2000. The first F-X/F-3 prototype is expected in the mid-2020s, with the final design planned to be finalized around 2028.

The stealthy design is expected to be interoperable with the United States military, by far Japan’s most significant defense partner. In particular, the F-X/F-3 will be able to operate with the American-made F-35. Japan’s F-35 fleet is made up of the conventional F-35A variant and the F-35B short landing, vertical take-off variant. Japan’s recent $23 billion F-35 order would add sixty-three F-35As and forty-two F-35Bs to the Japanese military, and are intended to be operable with Japan’s Izumo anti-submarine helicopter carrier.

The F-X/F-3 program was prompted both by a lack of access to American stealth and by recent advancements from Japan’s neighbor, China. Most notably, China has progressed with its own indigenous stealth program. Perhaps their most capable stealth airframe, the Chengdu J-20, made its first fight about a decade ago—and Japan does not want to be left behind. In addition to the Chengdu J-20 air superiority fighter, China has also progressed with several other stealth fighter designs, including the Shenyang FC-31, a smaller multirole fighter.

What exactly the final F-X/F-3 airframe will look like and what its capabilities will be have yet to be formalized, though given Japan’s industrial sophistication and relationship with the United States, whatever comes out of Japan will likely be a capable fighter. Watch this topic closely for more developments in the future.