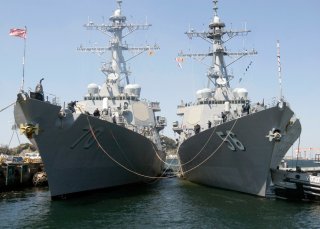 U.S. defense secretary Lloyd Austin pledged continued U.S. commitment to the “defense of Japan” at the Pentagon on September 14 while welcoming Japan’s Minister of Defense Yasukazu Hamada, adding that the U.S. military is prepared to use the “full range” of its “conventional and nuclear capabilities.”

Austin’s comments were consistent with the U.S. position, yet the Pentagon’s commitment to Japan continues to strengthen to unprecedented levels as part of a collaborative effort to deter China. The concept behind the strategy is one of “integrated deterrence,” an operational and strategic approach identified and emphasized by Austin as a way to optimize collective interoperability and war preparedness through joint training, technical and communications interfaces, and shared tactics.

“[W]e're going to discuss ways to further strengthen our defense cooperation, including our joint efforts to modernize the U.S.-Japan alliance and bolster integrated deterrence,” Austin said upon welcoming Hamada.

Hamada’s visit comes at a critical time for a number of pressing reasons. Of course, recent China-Russia collaborative training exercises and China’s ongoing threats to Taiwan figure prominently. Moreover, Hamada is visiting at a time when Japan is greatly increasing its defense budget and adjusting its military posture to allow greater levels of military force for defensive purposes. This was well articulated in Defense of Japan 2022, a recently published strategy document in which Japan outlined its defense priorities and long-term vision for security and stability in the Pacific. Not surprisingly, the document also outlined a new defense budget strategy called the “Defense Strengthening Acceleration Package.” The text of the Japanese document explains that the country’s 2022 budget plan is $55.3 billion yen larger than in previous years.

There is an interesting provision within the budget that allows for even more budget dollars to be allocated if they are related to what the Defense report called the “realignment of US forces” with Japan. This is quite significant as many years of U.S.-Japan cooperation on weapons development have yielded substantial results.

For example, Japan is one of a number of U.S. allies operating Aegis Combat Systems on their warships. Not only does this greatly expand allied interoperability, but the integrated software, radar, fire control, and missile system expands the range and capabilities of ballistic missile defense and air-and-cruise-missile defense at sea on Japanese warships. This is a critical capability for Japanese navy operators sailing in the Pacific’s large maritime expanse and those working to defend Japanese shores.