Vostok 2022: Are China and Russia Practicing for War Against America? 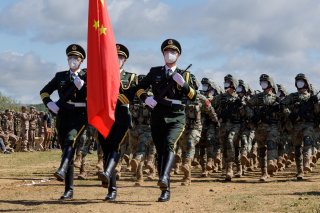 The Chinese government has publicly denied offering any support to Russia related to the ongoing invasion of Ukraine, despite reports of Chinese-Russian joint military exercises occurring in Russia during the Vostok 2022 exercise.

The Chinese paper describes what sounds like a traditional combined arms operation in which suppressive fire is delivered by self-propelled Howitzers before Type 99 main battle tanks and Type 04A infantry fighting vehicles attacked with support from anti-aircraft vehicles and man-portable air defense missiles.

However, the most significant element of the story pertains to what was not mentioned: the true extent of coordination, networking, and joint interoperability between Russian and Chinese forces. This is not an easy thing to accomplish, given the extent to which different countries’ sensors, radios, communications networks, and various transport layer technologies rely upon different protocols, technical formats, and data convergence requirements.

While the prospect of large-scale Russian-Chinese military cooperation and interoperability is likely to be concerning in any respect, a securely networked combined Russian-Chinese force would seem to present a far more serious threat. The “sheer” mass of any such force would present problems for any adversary, and this threat equation would be exponentially increased should both Chinese and Russian forces be capable of joint, multi-domain coordination.

The Vostok 2022 exercises involved air-ground coordination because Chinese J-10B aircraft were used to support ground operations, and the exercise will also be supported by joint patrols from Russian and Chinese warships.

The real measure of success, however, ultimately depends upon to what exact extent Russian and Chinese platforms can truly interoperate, interact, or share time-sensitive targeting data across domains in a multinational force.

This is a highly-desirable capability that NATO forces are continuing to hone, meaning interfaces, protocol, and technical standards are being put in place to ensure member nations can successfully interoperate with one another across multiple domains. Platforms like the F-35 Joint Strike Fighter jet now operated by numerous NATO countries have the Multifunction Advanced Data Link (MADL) technology which enables fast, seamless multi-national mission coordination and connectivity across dispersed formations.

Without an ability to efficiently share information across domains and between different countries’ ground armies, combined Russian-Chinese forces would be far less threatening. A truly interoperable Chinese-Russian capability, however, would potentially introduce unprecedented levels of concern among Pentagon decisionmakers.