Japan Will Soon Help Vietnam Extract Gas from the South China Sea. How Will China Respond? 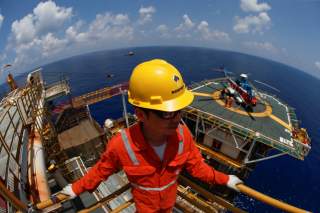 In a move likely to draw the ire of China, two Japanese firms have signed an agreement to help Vietnam develop and sell gas located in the South China Sea.

Idemitsu Kosan and Teikoku Oil signed the agreement with the Vietnamese state-owned oil and gas giant, PetroVietnam, on July 31. They will help develop and sell the gas located in the Sao Vang-Dai Nguyet project.

“The development of the project is significant since exploration and production activities have slowed down in recent years because of tensions in the South China Sea, the ongoing corruption crackdown and persistently low crude oil prices,” a PetroVietnam official told Reuters of the agreement.

The Sao Vang-Dai Nguyet project will develop gas located in Blocks 05-1b & 05-1c in the South China Sea. A map by Greg Poling, the director of the Asia Maritime Transparency Initiative at the Center for Strategic and International Studies, showed that “most (and probably all) of the block[s]” are within China’s so-called nine-dashed line.

The blocks are also near projects being carried out by Spanish energy firm Repsol and Russia’s Rosneft.

Earlier this year, PetroVietnam directed Repsol to halt its offshore oil project in the nearby block due to Chinese pressure. That came just days after a major gas field was discovered in the area.

An industry source told the BBC at the time that “Repsol executives were told last week by the government in Hanoi that China had threatened to attack Vietnamese bases in the Spratly Islands if the drilling did not stop.”

Meanwhile, Rosneft has warned Chinese pressure could undermine its drilling. Blocks 05-1b & 05-1c are somewhat closer to Vietnam than the Repsol and Rosneft project, and it's unclear if China will formally object to them.

Vietnam is believed to have between 3.3 billion and 4.4 billion ton of crude oil and gas reserves in the waters surrounding it. PetroVietnam produces between 22 million and 33 million tons of oil equivalents annually from the blocks, according to The Japan Times.

The same source notes that from the years 1986 to 2009, PetroVietnam accounted for 20 percent of Vietnam’s GDP and 30 percent of the government’s revenues.

But PetroVietnam’s lucrative offshore business has been increasingly threatened by Chinese pressure. As Bill Hayton wrote in his excellent book, South China Sea: The Struggle for Mastery in Asia, “With the exception of ExxonMobil every oil company has had to make a choice between operating in China or in the waters claimed by one of the other countries.”

While some smaller companies without interests in China have stayed, larger multinational companies have mostly cowed in the face of Chinese pressure.

ConocoPhillips sold its stakes between 2008 and 2012. Chevron Corp also sold its stakes in various projects. BP did the same, although that was partly because it needed the money to pay compensation for the Gulf oil spill.

If the Sao Vang-Dai Nguyet project goes through, it will be a much-needed bit of good news for PetroVietnam, which has fallen on tough times as of late. In the first seven months of this year, for instance, Vietnam’s crude oil production was down 11.3 percent from a year earlier.

As the company official who spoke to Reuters pointed out, these declining fortunes are not solely attributable to Chinese pressure tactics. Also contributing to the decline is Vietnam's anti-corruption campaign and the sagging energy prices of the last few years.

The plan now is for the Sao Vang-Dai Nguyet project to start producing commercial gas by the third quarter of 2020. Idemitsu Kosan will own 43 percent of the project followed by Reikoku Oil, which will hold around 37 percent. The remaining 20 percent will go to PetroVietnam.

Having Japanese firms with economic interests in the South China Sea could be another reason for the Japanese government to increase its involvement in the disputed waters.

Last month, news reports said that Tokyo was planning to send one of its massive helicopter destroyers on tour through the South China Sea and the Indian Ocean later this year.

The Kaga, which is the second of Japan’s Izumo-class helicopter destroyers, will leave Japan in September for a two-month tour that will include stops in Indonesia, India, and Sri Lanka, according to a Reuters report.

The lead ship in the Izumo-class made a similar trip last year.