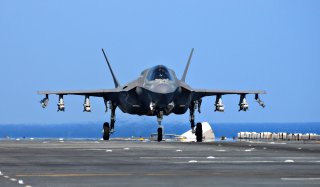 Here's What You Need To Remember: Perhaps more significant is that a Ford-class carrier is 100,000 tons fully loaded, while a British Queen Elizabeth-class carrier – which has a ski jump and 36 F-35Bs – comes in at 65,000 tons. The Izumo and Kaga weigh just 27,000 tons, with a length of about 800 feet, compared to 1,100 feet for a Ford. Would the Japanese ships be big enough to accommodate an electromagnetic catapult, arresting gear and a large enough carrier air wing to justify the cost?

Japan’s two Izumo-class “helicopter destroyers” are supposed to be converted from helicopter carriers into small aircraft carriers, flying a dozen or so F-35 jump jets off newly fitted ski-jump flight decks just as British and Russian aircraft carriers do.

But what if the Izumos could be converted into catapult-equipped aircraft carriers like the Nimitz- and Ford-class vessels?

A defense Web site has posted a photo – apparently a leaked Powerpoint slide – that shows an Izumo modified into a carrier that flies catapult-launched F-35C fighters – the same jets flown off the U.S. Navy’s carriers.

Interestingly, the bottom of the slide is marked General Atomics Electromagnetics. While best known as the manufacturer of America’s Reaper and Predator drones, General Atomics also makes the   Electromagnetic Aircraft Launch System (EMALS) and Advanced Arresting Gear (AAG) that will replace traditional steam catapults and arresting gear on the new Ford-class carriers.

There isn’t much detail on the slide (General Atomics did not respond to a National Interest query at press time). But at the top is a list marked “JMSDF [Japan Maritime Self-Defense Force] Aircraft: E2-C/E-2D Hawkeye, F-35C Lightning II, H-60 Seahawk, V-22 Osprey, Others?” A top and side view of a modified Izumo depicts a familiar carrier flight deck: two F-35s are placed amidships waiting to be catapulted, what looks like seven F-35s and an E-2 are parked on the starboard bow, helicopters are parked near the bridge, and what looks like two V-22s are planted on the stern.

The Izumo and her sister Kaga are odd ships, to say the least. They have flattop flight decks rather than ski jumps, so they can’t launch short-takeoff aircraft. But they also lack a catapult and arresting gear, so they can’t launch and recover conventional carrier-based aircraft like a U.S. F/A-18 Super Hornet.

Yet to say that F-35Cs and catapults would dramatically change an Izumo would be an understatement. Aircraft and other complex machines are compromises, and none more than the F-35 family. The F-35B is a short-takeoff and vertical landing (STOVL) aircraft that can be launched off a short flight deck with an inclined bow for that extra bit of lift, and then land like a helicopter, which eliminates the need for catapults and arresting gear. In that sense, it’s more versatile than the land-based F-35A or the catapult-launched F-35C. But nothing is free, thus the F-35B gives up some performance, range and payload compared to the F-35C.

If the choice is between a ski-jump carrier that carries a dozen F-35Bs and a few helicopters, versus no carrier at all, then the choice is obvious. But what if it were possible to have a conventional carrier that flies F-35Cs, not to mention the E-2 Hawkeye radar warning aircraft that vastly enhance the effectiveness of a carrier air wing?

At this point, we don’t know if General Atomics is just floating an idea to generate some extra business, or if the Japanese government is actively searching for a more capable carrier solution. Beginning next year, the two Izumos are supposed to begin conversion to carriers, which will very likely be ski-jump models at this point (Japan has already committed to buying 42 F-35Bs at more than $100 million apiece). Tokyo wants carriers as a counterweight to an increasingly assertive and capable Chinese navy, which itself is building carriers.

Still, there are question marks about a catapult-equipped Izumo. The EMALS catapult has been plagued by problems: an electrically-powered electromagnetic catapult is supposed to be lighter and capable of launching aircraft more quickly than a steam catapult, but EMALS has suffered reliability issues, leading President Trump to call for Ford-class carriers to switch back to steam.

Perhaps more significant is that a Ford-class carrier is 100,000 tons fully loaded, while a British Queen Elizabeth-class carrier – which has a ski jump and 36 F-35Bs – comes in at 65,000 tons. The Izumo and Kaga weigh just 27,000 tons, with a length of about 800 feet, compared to 1,100 feet for a Ford. Would the Japanese ships be big enough to accommodate an electromagnetic catapult, arresting gear and a large enough carrier air wing to justify the cost?

A Ford-class carrier cost about $13 billion each, a Queen Elizabeth about $6 billion apiece. The two Izumos cost a bit over $1 billion each as helicopter carriers. How much would it cost to convert them into conventional carriers, complete with aircraft? The numbers will be interesting.