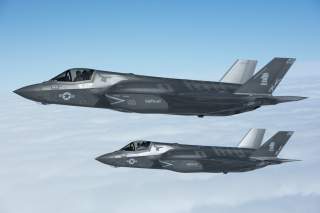 The Japanese government announced on Nov. 27, 2018 that it plans to modify its two Izumo-class helicopter carriers to support F-35B Lightning II stealth fighters.

The announcement follows years of speculation that began even before Izumo commissioned into service in 2015.

In related news, Tokyo reportedly plans order another 100 F-35s to supplement the 42 stealth fighters it originally ordered in 2011. The first batch of Japanese F-35s are all A-models that require conventional runways. The new batch presumably would include some vertically-landing F-35B models for shipboard use.

Recoating the Izumos' decks is a straightforward procedure. Potentially more difficult is reorganizing the ships' internal spaces to accommodate the crew, parts, fuel and weapons an F-35 detachment requires.

It can be done, according to one Australian expert who studied the possibility of modifying the Australian navy's Canberra-class assault ships for F-35s. A Canberra is 760 feet long and displaces 30,000 tons, making it roughly the same size as an Izumo.

Fortunately for Japan, its navy enjoys a strong alliance with the U.S. Navy. As Tokyo begins preparing the Izumos for F-35s, the Japanese fleet in theory could send pilots, staff and crew to train alongside their American counterparts who are already operating F-35s from ships.